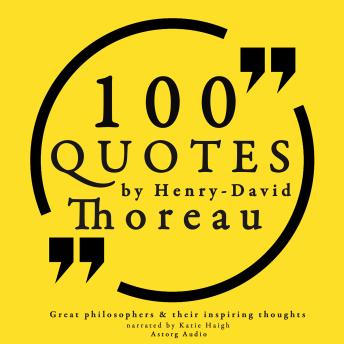 Henry David Thoreau is a beloved American author, poet and philosopher. He was a lifelong abolitionist, advocate of civil disobedience againts unjust or corrupted goverments, and he defended the idea of abandoning illusory matters in favor of simple living, in order to discover life's authentic essential needs. He is best known for Walden, or Life in the woods, the book he wrote during his two-year experiment in minimalist living: having built himself a cabin in the woods, he stayed there to study, write, and enjoy his newfound communion with nature. His political works and theory of civil disobedience have influenced the thoughts and actions of many prominent figures, such as Leo Tolstoy, Mahatma Gandhi, and Martin Luther King, Jr. We have selected for you 100 of Thoreau's most insightful quotes, for you to approach the essence of his philosophy, gain better understanding of a citizen's moral duty, and appreciate fully a life cleared of illusions.