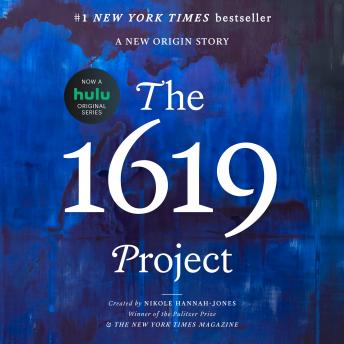 #1 NEW YORK TIMES BESTSELLER • A dramatic expansion of a groundbreaking work of journalism, The 1619 Project: A New Origin Story offers a profoundly revealing vision of the American past and present.

In late August 1619, a ship arrived in the British colony of Virginia bearing a cargo of twenty to thirty enslaved people from Africa. Their arrival led to the barbaric and unprecedented system of American chattel slavery that would last for the next 250 years. This is sometimes referred to as the country’s original sin, but it is more than that: It is the source of so much that still defines the United States.

The New York Times Magazine’s award-winning “1619 Project” issue reframed our understanding of American history by placing slavery and its continuing legacy at the center of our national narrative. This new book substantially expands on that work, weaving together eighteen essays that explore the legacy of slavery in present-day America with thirty-six poems and works of fiction that illuminate key moments of oppression, struggle, and resistance. The essays show how the inheritance of 1619 reaches into every part of contemporary American society, from politics, music, diet, traffic, and citizenship to capitalism, religion, and our democracy itself.

This is a book that speaks directly to our current moment, contextualizing the systems of race and caste within which we operate today. It reveals long-glossed-over truths around our nation’s founding and construction—and the way that the legacy of slavery did not end with emancipation, but continues to shape contemporary American life.

The incredible truth about the foundation of America and how it was the built on the backs of black Americans.

needed to be read!

A lot of opinion and conjecture, there is much that is bias, selective, deceptive and opinionated version of history. How about present the truth and the full history as we know it and let everyone form their own opinions. But honesty is not something you will find in this book.

This book is essential reading. If your reading just to have your view reinforced it might not be for you but it is carefully documented, well written and there’s poetry too.

I found the 1619 Project to be intellectually stimulating, poetically rich and enlightening. Surely it should be read in high school advanced placement classes, where future American leaders would learn the truth so that our country might live up to the promise of life, liberty and happiness for all it's citizens.

This book traces the historical fact that support the current issues in America. It even provides documentation to support the statement made. It will trigger those who have the false belief that blacks are inferior to white. It will further confirm that the social, justice system, political system, and bias that exist in America toward African Americans were purposely designed. If you are looking for a feel-good book or to confirm your white supremacy tendency/thoughts, this is not for you. Nor will it provide comfort for those who are sexist (black, white, Asian, Latinos, etc.) with your racist twist. While listening to it, I purchase the book to validate some of the historical facts stated. This book barely touches the surface of U.S. history which is at its best incomplete.

This title is due for release on November 16, 2021
We'll send you an email as soon as it is available!