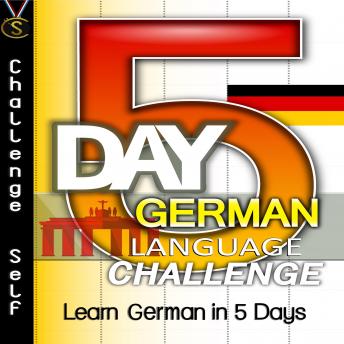 Written By: Challenge Self

Narrated By: Challenge Self

*You MUST download the accompanying reference material PDF in order to go through the audiobook.
Learn German with Your '5-Day German Language Challenge'
Why are you reading this? Because:
- You want to speak the secret gem language of the United States.
- You want to expand your professional network and reach in Europe.
- You want to be able to travel to the many countries that speak German.
- You want to study abroad for cheap or free college education in Germany.
- You want to have the easiest and fastest way to study German for beginners.
German is the most opportune language that you can learn. Why? Did you know that it is the most widely spoken language in Europe, as well as has a strong speaker base in North America?
In other words, it can unlock many hidden doors for you professionally at work and expand yourself personally at home and in life. Let’s look at some of the most advantageous reasons to why you should learn German:
Employment Edge – Obviously, someone who is bilingual is going to have a secret edge in the professional sphere. Not to mention, Germany is a huge economic player across the globe.
Education Benefit – Did you know that most universities in Germany are free to attend, or at least most affordable? You can travel to Germany and enjoy the benefit of a free or low-cost education.
Travel Convenience – German’s one of the most prevalent languages spoken in Europe. In fact, it’s the official language of countries such as Austria, Belgium, Liechtenstein, Luxemburg, and Switzerland.
Simple Language – German belongs to the same Germanic language tree as English, making it surprisingly easier to learn than people may think, plus will make learning other languages such as Danish, Dutch, Norwegian, and Swedish a lot easier.
There are just tons of advantages to knowing German. The '5-Day German Language Challenge' will open up that whole new world for you to enrich your life faster than you may ever know possible.

This title is due for release on January 30, 2020
We'll send you an email as soon as it is available!