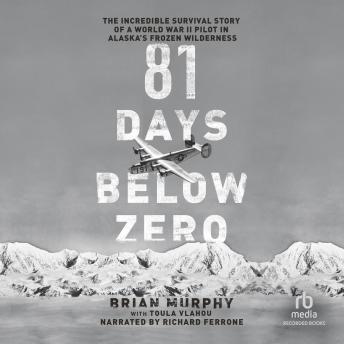 The untold story of Leon Crane, the only surviving crew member of a World War II B-24 crash on a remote mountain near the Arctic Circle, who managed to stay alive 81 days in sub-zero temperature by making peace with nature, and end his ordeal by walking along a river to safety. Part World War II story, part Alaskan adventure story, part survival story, and even part inspirational story, this is what we call ' a good read.' This is the first full length retelling of Crane' s incredible survivalist story. It has been noted in magazines and in story collections over the years: most notably, just after the war ended, Crane' s story was included in a book aptly titled, The 100 Best True Stories of World War II , and in the 1970s, the story was a part of John McPhee' s hot-selling collection of Alaskan survival tales, Coming into the Country. The author suggests that we think Jon Krakauer' s Into the Wild ' meets' Alfred Lansing' s Endurance . I would suggest that we also think Dick Proenneke' s Alone in the Wilderness ' meets' Slavomir Rawicz' s The Long Walk . These meetings can go on and on; but there are some very impressive WWII survival stories that have become bestselling books-- even with previously ' untold' and ' unknown' stories, like Crane' s.

"The untold story of Leon Crane" and this book sure does not fix that. I think around 3 pages could have told the same story. the rest is just fluff and an irrelevant sidetrack in Avionics history.

very enjoyable. Great research and an exciting story. Had me on the edge of my seat quite a bit. On an astonishing time in world history all of this was. I followed the war very closely and never even thought about what was going on in Alaska and test pilots and winter survival etc. Loved it

Gripping story, however I felt half the book was about Leon's survival and the other half filler. Nevertheless a good book

This is an excellent account of that piece of the war effort.

Loved both the historical war time memoir and wilderness adventure combined for a great read. That the author was from my home town in Philadelphia was a surprise and made it more personal as he spoke about places I know. I would recommend.

Story of LT. Crane were part of the story the opening of Alaska by bush pilots, the Army Air Corps learning about flight in extreme cold conditions and what happened to the rest of the crew. Not a great or in depth story but worth the time invested. In the end Crane was very lucky.

The story was good, a little too much on the history lesson of World War Two.