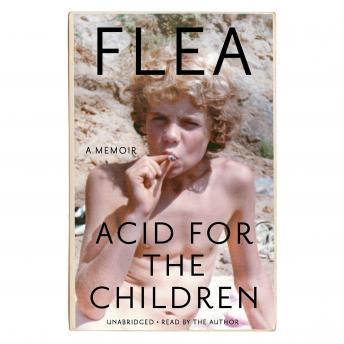 Acid for the Children: A Memoir

With 'virtuosic vulnerability' (The Atlantic), the iconic bassist and Red Hot Chili peppers co-founder pens a love letter to a youth spent wild in Los Angeles in his raw and riveting coming-of-age memoir.
In Acid for the Children, Flea takes readers on a deeply personal and revealing tour of his formative years, spanning from Australia to the New York City suburbs to, finally, Los Angeles. Through hilarious anecdotes, poetical meditations, and occasional flights of fantasy, Flea deftly chronicles the experiences that forged him as an artist, a musician, and a young man. His dreamy, jazz-inflected prose makes the Los Angeles of the 1970s and 80s come to gritty, glorious life, including the potential for fun, danger, mayhem, or inspiration that lurked around every corner. It is here that young Flea, looking to escape a turbulent home, found family in a community of musicians, artists, and junkies who also lived on the fringe. He spent most of his time partying and committing petty crimes. But it was in music where he found a higher meaning, a place to channel his frustration, loneliness, and love. This left him open to the life-changing moment when he and his best friends, soul brothers, and partners-in-mischief came up with the idea to start their own band, which became the Red Hot Chili Peppers.

Acid for the Children is the debut of a stunning new literary voice, whose prose is as witty, entertaining, and wildly unpredictable as the author himself. It's a tenderly evocative coming-of-age story and a raucous love letter to the power of music and creativity from one of the most renowned musicians of our time.

Beautifully written and gorgeously relatable in a technicolor way! I love Flea even more and I didn’t think that was possible!❤️

Wish I could return for refund. Can’t get past first chapter.

I very much enjoyed his writing style. The book seems a bit disjointed at times. Troubling and sad.. Can’t believe he could do so many drugs at such a young age and come out the end writing so well.

Great book with insight to who Flea is. Glad he narrated it. Lots of profanity and talk of drugs, so avoid this book if that bothers you. Not too much on his later career or shows but plenty on his personality and influences as well as his personal life.