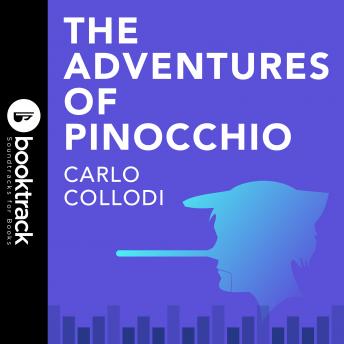 The Adventures of Pinocchio

Listen to The Adventures of Pinocchio with a movie-style soundtrack and amplify your audiobook experience.

Do today's children still learn what a "marionette" is? The beloved story of Pinocchio may represent a last lingering picture of a world not dominated by plastic or electronic toys. Pinocchio is a puppet made from a piece of wood that curiously could talk even before being carved. A wooden-head he starts and a wooden-head he stays - until after years of misadventures caused by his laziness and failure to keep promises he finally learns to care about his family - and then he becomes a real boy. For those who have seen the Disney movie the cast of characters will be familiar, from the Talking Cricket (who acts as his conscience) to Lamp-Wick, his partner in truancy and having heedless fun. Though the toys of today are far from the puppet shows in Carlo Collodi's book, his themes of being truthful, thoughtful, and dependable will always be timely.

This title is due for release on March 4, 1905
We'll send you an email as soon as it is available!