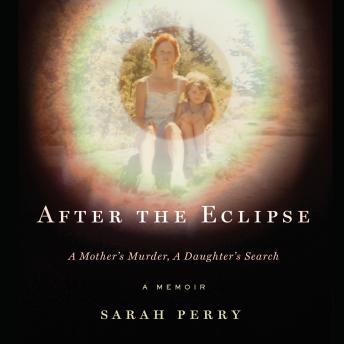 After the Eclipse: A Mother's Murder, a Daughter's Search

When Sarah Perry was twelve, she saw a partial eclipse of the sun, an event she took as a sign of good fortune for her and her mother, Crystal. But that brief moment of darkness ultimately foreshadowed a much larger one: two days later, Crystal was murdered in their home in rural Maine, just a few feet from Sarah's bedroom.

The killer escaped unseen; it would take the police twelve years to find him, time in which Sarah grew into adulthood, struggling with abandonment, police interrogations, and the effort of rebuilding her life when so much had been lost. Through it all she would dream of the eventual trial, a conviction-all her questions finally answered. But after the trial, Sarah's questions only grew. She wanted to understand her mother's life, not just her final hours, and so she began a personal investigation, one that drew her back to Maine, taking her deep into the abiding darkness of a small American town.

Told in searing prose, After the Eclipse is a luminous memoir of uncomfortable truth and terrible beauty, an exquisite memorial for a mother stolen from her daughter, and a blazingly successful attempt to cast light on her life once more.

The narration of this compelling true life experience is exceptional, and I was drawn in from the first few minutes of the preview. I realized the author was presenting a book like none I have ever read...and a perspective worth the time to study. Thank you, Sarah Perry...

This book dragged on for at least 3 hours too long. Sarah said the same things over and over again throughout the book, for example her description and feelings the night of the murder. I understand her sadness, but she sounds obsessed with being and looking like her mother, even years later. Way too many times unimportant details throughout and pointless mentions of things, like the OJ Simpson trial??? Some things she talked of had no relevance to the story.

I felt like this was decent, for a book in the club. This dragged, majorly long and drawn with nothing to keep/hold attention a few hours from the end. There is nothing truly being said a chapter after the trial but, its still going and going. I wish I got a better understanding of Sarah and how her relationships with everyone who helped her, after the mothers murder ended so badly, or why nothing good is said about anyone in this book but her mother.

I had avoided this book based on the cover photo and the title, I only started listening when I couldn’t choose something... I am so glad I did!!! The narrator does an amazing job capturing the emotion of the author. The author keep me captivated by the halfway mark of the prologue... can’t say enough good things. Not a gory violent typical true crime, it’s a memoir and I will for sure remember it!!!