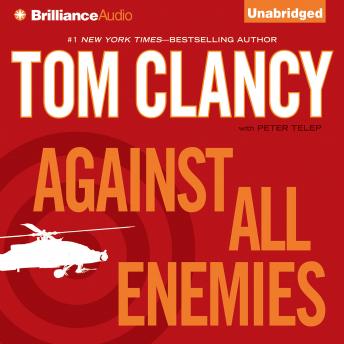 For years, ex–Navy SEAL Maxwell Moore has worked across the Middle East and behind the scenes for the Special Activities Division of the CIA, making connections, extracting valuable intelligence, and facing off against America’s enemies at every turn.And then…news of a potentially devastating coalition: What if two of the greatest threats to the security of the United States were to form an unholy alliance? The Taliban is trying to exploit a Mexican drug cartel to which they supply opium as a means to bring the fire of jihad to the hearts of the infidels. It is up to Moore, and his team, to infiltrate and dismantle the drug cartel, even as they hunt for those who would bring the ultimate terror and destruction to the streets of America.In a story that races from the remote, war-scarred landscapes of the Middle East to the blood-soaked chaos of the U.S.–Mexico border, Tom Clancy once again delivers a heart-stopping thriller that is frighteningly close to reality.

Great book, description of areas and locations were right on, almost all of the technical descriptions were very accurate, and the timing of events keep me going on the drive from Flagstaff to Lexington.

Tom Clancy “Against all enemies” a fantastic read. The story is engaging all the way through and twists and turns continuously. The dialogue sounds authentic and the narrator is the best I have ever listened to. He adopts the accent of the different nationalities given to each character superbly which helps you picture the person and imagine the conversations. One of my best buys. Make note of the narrator , the book would not be as gripping without him!

Not the best, but not bad. Different characters than I was used to but typical of Clancy in development. Narrator is very good, but he isn't Lou Diamond Phillips who I thought was the best when I heard him recently on two Campus Series books.