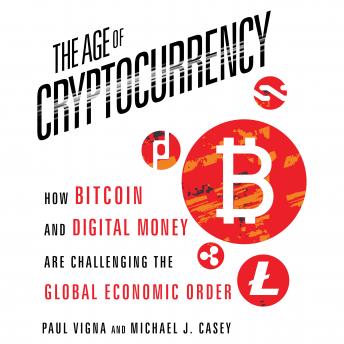 The Age Cryptocurrency: How Bitcoin and Digital Money Are Challenging the Global Economic Order

Bitcoin became a buzzword overnight. A cyber-enigma with an enthusiastic following, it pops up in headlines and fuels endless media debate. You can apparently use it to buy anything from coffee to cars, yet few people seem to truly understand what it is. This raises the question: Why should anyone care about bitcoin?

In The Age of Cryptocurrency, Wall Street journalists Paul Vigna and Michael J. Casey deliver the definitive answer to this question. Cybermoney is poised to launch a revolution, one that could reinvent traditional financial and social structures while bringing the world's billions of 'unbanked' individuals into a new global economy. Cryptocurrency holds the promise of a financial system without a middleman, one owned by the people who use it and one safeguarded from the devastation of a 2008-type crash.

But bitcoin, the most famous of the cybermonies, carries a reputation for instability, wild fluctuation, and illicit business; some fear it has the power to eliminate jobs and to upend the concept of a nation-state. It implies, above all, monumental and wide-reaching change-for better and for worse. But it is here to stay, and you ignore it at your peril.

Vigna and Casey demystify cryptocurrency-its origins, its function, and what you need to know to navigate a cyber-economy. The digital currency world will look very different from the paper currency world; The Age of Cryptocurrency will teach you how to be ready.

Age Cryptocurrency: How Bitcoin and Digital Money Are Challenging the Global Economic Order

This title is due for release on February 1, 2015
We'll send you an email as soon as it is available!