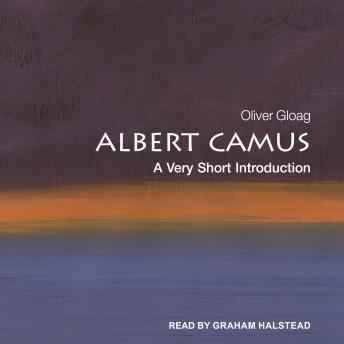 Few would question that Albert Camus (1913-1960), novelist, playwright, philosopher and journalist, is a major cultural icon. His widely quoted works have led to countless movie adaptions, graphic novels, pop songs, and even t-shirts.

In this Very Short Introduction, Oliver Gloag chronicles the inspiring story of Camus' life. From a poor fatherless settler in French-Algeria to the winner of the Nobel Prize for Literature, Gloag offers a comprehensive view of Camus' major works and interventions, including his notion of the absurd and revolt, as well as his highly original concept of pure happiness through unity with nature called 'bonheur'. This original introduction also addresses debates on coloniality, which have arisen around Camus' work.

Gloag presents Camus in all his complexity a staunch defender of many progressive causes, fiercely attached to his French-Algerian roots, a writer of enormous talent and social awareness plagued by self-doubt, and a crucially relevant author whose major works continue to significantly impact our views on contemporary issues and events.