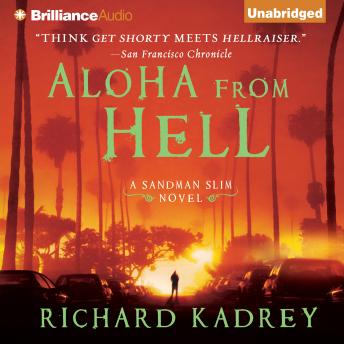 In Sandman Slim Stark came back from hell for revenge.In Kill the Dead he tackled both a zombie plague and being Lucifer’s bodyguard.Once again all is not right in L.A. Lucifer is back in Heaven, God is on vacation, and an insane killer mounts a war against both Heaven and Hell.
Stark’s got to head back down to his old stomping grounds in Hell to rescue his long lost love, stop an insane serial killer, prevent both Good and Evil from completely destroying each other, and stop the demonic Kissi from ruining the party for everyone.Even for Sandman Slim, that’s a tall order. And it’s only the beginning.“Don’t compare Kadrey’s prose with Stephenie Meyer’s, or even Joss Whedon’s Buffy the Vampire Slayer. Those works are mere fluffy soap operas next to Kadrey’s writing.” —Seattle Post-Intelligencer

Great urban fantasy series! Takes you to hell and back.

This title is due for release on October 18, 2011
We'll send you an email as soon as it is available!