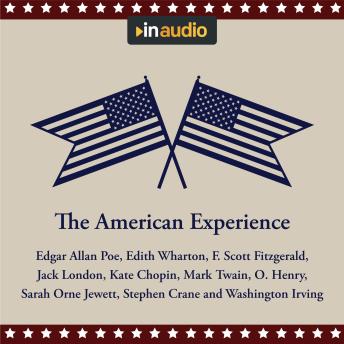 The American Experience: A Collection of Great American Stories

Various
A free trial credit cannot be used on this title

Ten superbly narrated stories that help explain America by America's best writers. Irving's incredible and amusing tale of the archetypal 'Rip Van Winkle' relates the story of a man who slept through history. Stephen Crane's 'The Red Badge of Courage' tells of a young soldier who must struggle with his conscience no matter what the consequences. 'The Notorious Jumping Frog of Calaveras County' is Mark Twain's hilarious story of a contest to end all contests in the rowdy days of the Forty-Niners. Edgar Allan Poe's 'The Man of the Crowd' tells of one man's strange fascination with another. 'The Ransom of Red Chief' is another of O. Henry's tales of a kidnapping that goes horribly, horribly, wrong. 'Miss Tempy's Watchers', by Sarah Orne Jewett, speaks of the power of friendship. Kate Chopin's lovely 'Desiree's Baby' tells the poignant story of one woman's search for her past. Jack London's acclaimed The Call of the Wild is a thrilling adventure of nature and survival. Edith Wharton pens a chilling ghost story in the atmospheric 'The Eyes.' And 'Bernice Bobs Her Hair' is F. Scott Fitzgerald's wry and amusing tale of a young lady's struggle for social success.

'The Man of the Crowd'
by Edgar Allan Poe,
narrated by Ralph Cosham

'The Red Badge of Courage'
by Stephen Crane,
narrated by Sean Pratt

'The Ransom of Red Chief'
by O'Henry,
narrated by Michael Hanson

'The Call of the Wild'
by Jack London,
narrated by Michael Kramer

'The Eyes'
by Edith Wharton,
narrated by Ralph Cosham

This title is due for release on January 1, 2003
We'll send you an email as soon as it is available!