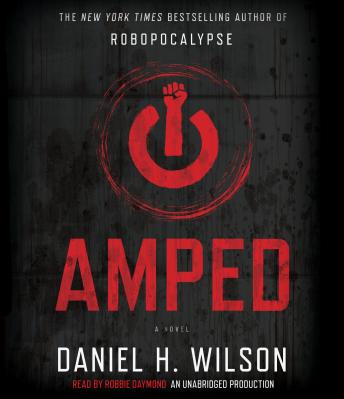 Technology makes them superhuman. But mere mortals want them kept in their place. The New York Times bestselling author of Robopocalypse creates a stunning, near-future world where technology and humanity clash in surprising ways. The result? The perfect summer blockbuster.

As he did in Robopocalypse, Daniel Wilson masterfully envisions a frightening near-future world. In Amped, people are implanted with a device that makes them capable of superhuman feats. The powerful technology has profound consequences for society, and soon a set of laws is passed that restricts the abilities—and rights—of 'amplified' humans. On the day that the Supreme Court passes the first of these laws, twenty-nine-year-old Owen Gray joins the ranks of a new persecuted underclass known as 'amps.' Owen is forced to go on the run, desperate to reach an outpost in Oklahoma where, it is rumored, a group of the most enhanced amps may be about to change the world—or destroy it.

Once again, Daniel H. Wilson's background as a scientist serves him well in this technologically savvy thriller that delivers first-rate entertainment, as Wilson takes the 'what if' question in entirely unexpected directions. Fans of Robopocalypse are sure to be delighted, and legions of new fans will want to get 'amped' this summer.

The idea of using implants to adapt human physiology has always fascinated me. My curiosity was piqued while listening to the story, but the plot twists kept me listening. Wasn’t a big fan of the narrator, but he was better than a few other narrators I’ve listened to over the years. I also wasn’t a huge fan of the vulgarity, for the sake of using it. The use reminded me of the way Stephen King uses “big words” to fill up the pages. Overall, if you enjoyed Robopocalypse you might enjoy this story.

This title is due for release on June 5, 2012
We'll send you an email as soon as it is available!