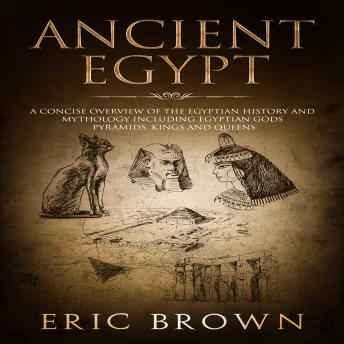 Ancient Egypt: A Concise Overview of the Egyptian History and Mythology Including the Egyptian Gods, Pyramids, Kings and Queens

Explore the History and Mythology of the Egyptian Kingdom!
There are many mysteries of the ancient Egyptian empire and dynasties. Archaeologists and Egyptologists have been studying the artifacts and ruins for centuries, and there is still much left to learn. The body of Cleopatra VII, who was the last ruler of Egypt and is one of the most famed people in history, has never been discovered. Yet, there have been many amazing discoveries, such as the tomb of King Tutankhamun or King Tut, which was discovered fully intact and full of amazing artifacts, engravings, and history.
Through exploring the ancient Egyptian ruins and tombs, we have been able to learn much about their way of life, views of the afterlife, religious beliefs, dynasties, invasions from foreign kingdoms, battle tactics, family, and more...
In this book you will find:
How Egypt came to become the first empire
The creation myth of Amun-Ra, Osiris, and Set
A timeline of the entire reign of the Egyptian dynastic periods, from the Old Kingdom to Roman Egypt
The Heliopolitan Ennead and its importance
Details on some of the most important gods including Ra, Amun-Ra, Anubis, Bastet, Isis, and Sekhmet
Details on the life of some of the most prominent kings including Menes, Cheops, Amenemhet I, Tuthmosis I and III, Akhenaten, Ramesses II and III, and Ptolemy I Soter
The lives of some of the most important queens and how they gained power including Khentkawes I, Ahmose-Nefertari, Hatshepsut, Tiye, Nefertiti, and the famed Cleopatra VII
How the pyramids and temples were built
Busting the myth that the slaves built the pyramids
One of the most prominent myths of the afterlife
How the water levels of the Nile caused either prosperity or disaster
The daily lives of Egyptians, how they farmed, their family dynamic, and hygiene
And more...
Don't wait another moment to enjoy from this information - Get your copy of Ancient Egypt right away!