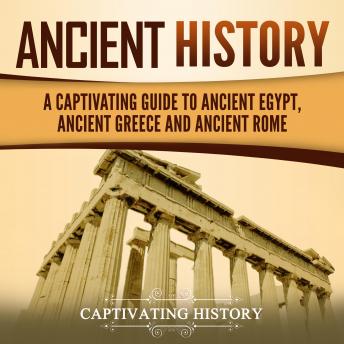 If you want to discover captivating stories of people and events of ancient Egypt, Greece and Rome then pay attention...

Three captivating manuscripts in one audiobook:

Some of the topics covered in part 1 of this audiobook include:


- Who Were Ancient Egyptians—Their Origins, History, and Geography
- Who Held the Power: The Social Structure of Ancient Egypt
- Kings and their Military Power
- The Magnificent Pharaohs of the New Kingdom and Their Empire
- And much more!

Some of the topics covered in part 2 of this audiobook include:


- Dawn of the Dark Ages
- From Darkness to Democracy
- Olympic Origins
- Greece Grows from War to War
- The Fight for Democracy
- The Peloponnesian War
- Enter Alexander the Great
- And much more!

Some of the topics covered in part 3 of this audiobook include:


- The Seven Kings of Seven Hills: the Foundation of Rome and Its First Rulers
- The Early Republic
- The Punic Wars and Mediterranean Dominance: The Middle Republic
- Decay, Corruption, and Civil Wars: The Late Republic
- Gaius Julius Caesar, Crossing the Rubicon, and Death that Shook the City
- The Rise of First Roman Emperor
- And much, much more!

So if you want to learn about ancient Egypt, Greece and Rome without having to read boring textbooks, click 'add to cart'!

This title is due for release on December 1, 2019
We'll send you an email as soon as it is available!