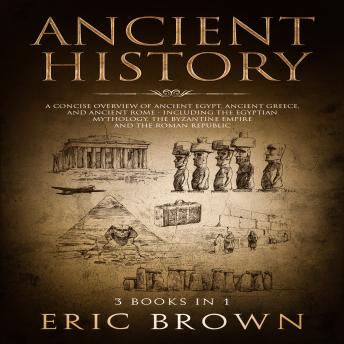 Ancient History: A Concise Overview of Ancient Egypt, Ancient Greece, and Ancient Rome: Including the Egyptian Mythology, the Byzantine Empire and the Roman Republic

Narrated By: John B Leen

Explore the history and mythology of Egypt, Greece and Rome!
*** Three books In 1 - Ancient Egypt, Ancient Greece, Ancient Rome ***
Ancient Egypt:
Through exploring the ancient Egyptian ruins and tombs, we have been able to learn much about their way of life, views of the afterlife, religious beliefs, dynasties, invasions from foreign kingdoms, battle tactics, family, and more.
In this book you will find:
How Egypt came to become the first empire
The creation myth of Amun-Ra, Osiris, and Set
A timeline of the entire reign of the Egyptian dynastic periods, from the Old Kingdom to Roman Egypt
How the pyramids and temples were built
And more...
Ancient Greece:
Where did Greek culture come from? When did it begin to taste shape? Where there any precursors to the Ancient Greeks?
Find the answers to all of these questions and:
Start your amazing journey into the world of Ancient Greece with a look at the rise of Greece in the Archaic era
Follow Ancient Greece on its path to great power and prosperity and we move into the hugely important Classical era
Find out how the world changed in massive ways, and Ancient Greece shifted along with the changing times of the Hellenistic era
And more...
Ancient Rome:
Few societies and historical periods capture our fascination as much as ancient Rome...
In this book you are going to find out about:
The founding and rise of the Roman Republic
The era of an empire
The Christianization of the empire and its impact
The masterpiece of Rome
How it becomes a melting pot of theism
And more...
Don't wait another moment to enjoy from this information. Get your copy of Ancient History right away!

Ancient History: A Concise Overview of Ancient Egypt, Ancient Greece, and Ancient Rome: Including the Egyptian Mythology, the Byzantine Empire and the Roman Republic