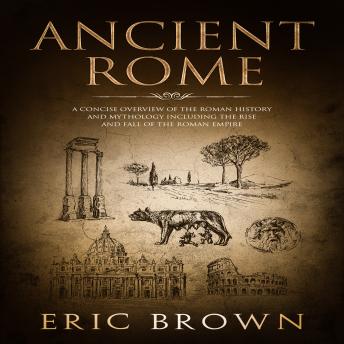 Ancient Rome: A Concise Overview of the Roman History and Mythology Including the Rise and Fall of the Roman Empire

Narrated By: John B Leen

Explore the History and Mythology of the Roman Empire!
Few societies and historical periods capture our fascination as much as ancient Rome. With a founding steeped in legend, along with the rise and fall of a monarchy, a republic, and an empire filled with colorful, and often even bizarre, leaders and popular figures, it is no wonder that it has been the source of inspiration for a multitude of novels, movies, and television shows.
While this entertainment fare has had varying degrees of historical accuracy, a great deal of artistic license does not need to be taken to make the story of ancient Rome intriguing and scintillating. It was a society and a people rich with a drama that still captures our interest even today, more than 1500 years since the fall of the great Roman Empire.
In this book you are going to find out about:
The founding and rise of the Roman Republic
The era of an empire
The Christianization of the empire and its impact
The masterpiece of Rome
How it becomes a melting pot of theism
And more...
Don't wait another moment to enjoy from this information - Get your copy of Ancient Rome right away!

Ancient Rome: A Concise Overview of the Roman History and Mythology Including the Rise and Fall of the Roman Empire