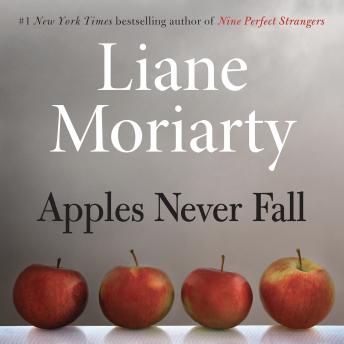 From Liane Moriarty, the #1 New York Times bestselling author of Big Little Lies and Nine Perfect Strangers, comes Apples Never Fall, an audiobook that looks at marriage, siblings, and how the people we love the most can hurt us the deepest.

The Delaney family love one another dearly—it’s just that sometimes they want to murder each other . . .

If your mother was missing, would you tell the police? Even if the most obvious suspect was your father?

This is the dilemma facing the four grown Delaney siblings.

The Delaneys are fixtures in their community. The parents, Stan and Joy, are the envy of all of their friends. They’re killers on the tennis court, and off it their chemistry is palpable. But after 50 years of marriage, they’ve finally sold their famed tennis academy and are ready to start what should be the golden years of their lives. So why are Stan and Joy so miserable?

The four Delaney children—Amy, Logan, Troy, and Brooke—were tennis stars in their own right, yet as their father will tell you, none of them had what it took to go all the way. But that’s okay, now that they’re all successful grown-ups and there is the wonderful possibility of grandchildren on the horizon.

One night a stranger named Savannah knocks on Stan and Joy’s door, bleeding after a fight with her boyfriend. The Delaneys are more than happy to give her the small kindness she sorely needs. If only that was all she wanted.

Later, when Joy goes missing, and Savannah is nowhere to be found, the police question the one person who remains: Stan. But for someone who claims to be innocent, he, like many spouses, seems to have a lot to hide. Two of the Delaney children think their father is innocent, two are not so sure—but as the two sides square off against each other in perhaps their biggest match ever, all of the Delaneys will start to reexamine their shared family history in a very new light.

Another great story by Liane Moriarty! Loved the audiobook narrator. She does an excellent job telling this story!

Loved it. Always a great fan.

slow start....I debated several times on abandoning completely. pushed thru....it was a little better toward the 3/4 way thru.

I noticed that some gave this o lower rating and I disagree! Liane is a great writer. Her books start out a little slow because she is introducing us to these amazing characters that she develops so well and she is setting up the story. I am always sad when the book ends and this time wasn’t any different. There is a little mystery and drama unfolding here and you feel like you are a part of it all. Please stick with the book. It’s great!!

Ugh. Painful. The narrator sound like a teenage girl

I hate to pay for a book and not finish it, but I am halfway through, and it’s too dull to finish

The narrator did such a beautiful job. The story keeps you coming back for more.

Omg worst book EVER!!! I literally was so disappointed when Joy ended up alive and okay! All the characters in this book are all horrible. After listening to this I hate Australia now!!!! Don’t waste your time. It’s like listening to a dumpster fire.

I looked forward to this book for months. SO disappointed. I love L.M. and Caroline Lee is the 1st narrator I fell in love with when I started listening to. audiobooks. But, this book is absolutely not up to par for this talented author. I tried,,,oh how I tried...3 times. but it was just ungodly slow. it was chapter after chapter of nothing.... and a far fetched nothing. especially for these times. I was so frustrated that any one would even let someone in their home no questions asked, they sleep over, hang out no issue....really!? Just not realistic, it bothered me and it just slithered along. no development or story building. what happened LM??? I asked another person Imet and she was much further along that I was on my 3rd attempt, she said,,"Nope I'm towards the end, it doesn't get any better. Nothing is really going on, boring" I gave up at that point. too many good books to waste my listening time on....well. whatever this is.

Entertaining for a while, but way too long for the content, and I was ready for it to be over long before it was actually over. The narrator may have fit the story well, but it did get a little old to hear the same high pitched classic Aussie twang with a lot of glottal fry for almost every character.

It took a little while to get into the story but once that happens it’s very enjoyable. Loved all the characters.

Love her books and love the narrator who perfectly captures the characters voices and inflections. Favorite author. Don’t watch the movies! Read the books!

Could have been SO much shorter. The plot is flimsy and the characters flat and stereotypical. I really struggled to get through it. I wouldn’t call it good literature or good escapism so I really don’t see the point of this novel.

Book was an entertaining listen. The narrator’s voice was a bit irritating due to her high pitch at times.

Loved the storyline, and the narrator’s Aussie accent was phenomenal!

Another great book by Liane Moriarty. I found things to do in the house so I could continue listening. It took me a bit to get used to the narrator but by the end I liked her reading of the book

Very intriguing! It started off a little slow but WOW!!! The details, the lead up to the end...amazingly written. I loved it!

I tend to love Moriarty books, I’m always waiting for the bomb to drop that makes my jaw drop and this book never had that. It was predictable and quite boring tbh. Very disappointed as I am a big fan of hers.

I purchased this book because of the high ratings. As soon as I started to listen to the book, I soon realize my mistake. I should have read some of the reviews before purchasing. The narrators Australian voice is annoying and too high pitched for me to listen to. In addition, the writing is so poor that a fifth grader could write better. For example the writing Is redundant, overanalyzed, and repetitive… an example “it’s Anne with an E”. Got it the first three times. This is truly a horrible book!

What a great read! Never a dull moment. Funny, heart warming, cruel, and creepy all in one!

Bought several copies to give as gifts!

I am never disappointed by liane Moriarty! Always intrigued until the end. And the narrator was fabulous. If you are a fan of this author, you will love this!

Love this narrator. The story went a bit long, and not as exciting as her usual novels, but enjoyable enough to hold my attention

Loved the story, loved the narration...as with many of Liane's books, I wish there were a few more hours to hear...

Took a lot to get through. The book itself not one of my favorites I cannot stand this narrator voice. I will avoid books read by her from now on. I won't recommend this one

This was not my favorite. Long and drawn out.

Maybe I'm just not interested in tennis enough, but this was one of my least favorite Liane Moriarty books. I just didn't find this book as relatable, gripping and hilarious as all her other books. I enjoyed it, and loved the narrator as usual, but this book didn't have as satisfying of an ending as I would have liked.

If Liane Moriarty writes it, I’m going to read it and love it! This was such an entertaining book; with a great reader who’s also always wonderful, as well! It kept me guessing until the end. I love the family dynamic and the character development. I cared about all of them.

Moriarty and Lee are just getting better and better. My only disappointment is the book ending and the long wait for the next one. I would give them both 10 stars if I could.

Not good at all. listened to as much as I could and finally quit. It didn't hold my attention, it goes off into so much minor detail in many different areas so you aren't sure if you're coming or going. The narrator was a bit too much for this book, maybe a little better with a male voice with less accent. This one is just a NO for me.

Good book! Horrible narrator- had it not been for the plot-characters and writing, I would have had to put it away due to the horrible scratchy screeching voice.

Great book! As exciting a read as Big Little Lies. I think I liked it even better!! The narrator does an amazing job and really brings the story to life. Do not miss out on this one.

I usually like Liane Moriarty but this one was a pass for me. The narrator was so high pitched and screechy I felt like she was screaming . Unpleasant to listen to and the story was long and convoluted. The ending also left a lot to be desired.