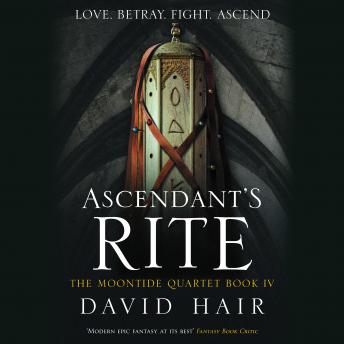 The Lost Legions are trapped between two massive armies, both intent on their annihilation, because they have discovered secrets that could tear the empire apart. Ramon and Seth are going to need all of their cunning, tenacity and bravery if they are to get their men across the Bridge to safety.

In Javon, Cera Nesti, once again Queen-Regent for her brother Timori, is leading the Javonesi rebellion against the overwhelming might of the Rondian Empire. She needs the skill and courage of her friends if the kingdom is to survive - but first, she must regain their trust.

And most crucially, the Scytale of Corineus - the key to becoming an all-powerful Ascendant mage - has fallen into deadly hands: the Seeress Huriya and the Inquisitor Malevorn. Alaron and Ramita must prevent the rise of a terrifying new power, but to do so they need the aid of the 'Queen of Evil' and a small group of Zain monks who have retreated from the world and taken a vow of peace.

The time has come for the Rite of Ascendancy to be performed, and for new powers to rise - to save or damn Urte for all time.