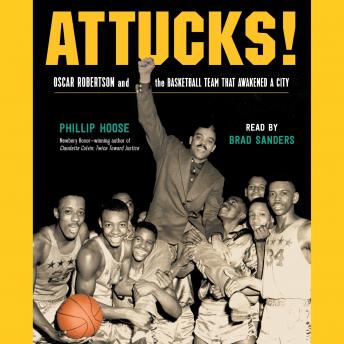 Attucks!: Oscar Robertson and the Basketball Team That Awakened a City

'Narrator Brad Sanders's baritone voice bestows deserved gravitas on this remarkable story...Hoops and history fans won't be the only ones appreciating this inspirational listen.' - AudioFile Magazine

Attucks! is the true story of the all-black high school basketball team that broke the color barrier in segregated 1950s Indiana, masterfully told by National Book Award winner Phil Hoose.
By winning the state high school basketball championship in 1955, ten teens from an Indianapolis school meant to be the centerpiece of racially segregated education in the state shattered the myth of their inferiority. Their brilliant coach had fashioned an unbeatable team from a group of boys born in the South and raised in poverty. Anchored by the astonishing Oscar Robertson, a future college and NBA star, the Crispus Attucks Tigers went down in history as the first state champions from Indianapolis and the first all-black team in U.S. history to win a racially open championship tournament-an integration they had forced with their on-court prowess.
From native Hoosier and award-winning author Phillip Hoose comes this true story of a team up against impossible odds, making a difference when it mattered most.
This title has Common Core connections.

Attucks!: Oscar Robertson and the Basketball Team That Awakened a City