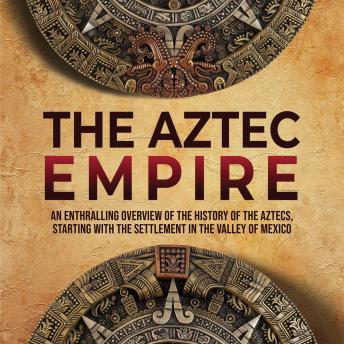 The Aztec Empire: An Enthralling Overview of the History of the Aztecs, Starting with the Settlement in the Valley of Mexico

If you are curious about how the extraordinary Aztecs lived and ran their empire, then pay attention!

The remarkable Aztecs formed a vast, organized empire renown for military prowess, expansive trade, intriguing culture, and ingenious agriculture – all from an island in a swamp. But where was their mysterious homeland of Aztlan? How did they ascend to dominance in the Valley of Mexico?

Explore the mesmerizing origins of the Aztecs, discover how a wandering desert tribe came to rule much of present-day Mexico, and investigate the spectacular – albeit somewhat depraved – culture that set their civilization apart.

This easy-to-read, comprehensive, and engaging history of the Aztec Empire will unlock the little-known and awe-inspiring stories and culture of a legendary people. This well-researched and authoritative presentation, accompanied by striking illustrations, brings the Aztec civilization to life.

Here are some of the fascinating questions you will explore:


- What secrets have recent archaeological finds uncovered about the Aztecs and other Mesoamerican cultures?
- How did the startling cultures that existed before the Aztecs influence them? What made these pre-existing cultures famous?
- What prophesies propelled the Mexica into their empire-building destiny and formed their self-identity?
- Why did the Mexica build their astonishing city on an island in the middle of a lake? How did it grow into one of the largest cities in the world at that time?
- Was their mysterious homeland of Aztlan a real place? If so, where was it?
- What’s this story about an eagle on a cactus eating a rattlesnake?
- How did the Mexica turn the tables to rule over the tribes that once dominated them?
- And much, much more!

Scroll up and click the “add to cart” button to learn more about the incredible Aztecs!

Aztec Empire: An Enthralling Overview of the History of the Aztecs, Starting with the Settlement in the Valley of Mexico

This title is due for release on August 2, 2021
We'll send you an email as soon as it is available!