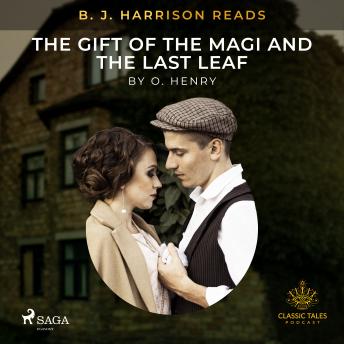 B. J. Harrison Reads The Gift of the Magi and The Last Leaf

'The Gift of the Magi' is a short story about love, selflessness, sacrifices and struggles. Della and James are a young married couple who want to surprise each other with a secret gift for Christmas. Unfortunately, neither of them has much money yet still they each hope they'll manage to buy something in time and that it will be appreciated.
'The Last Leaf' tells us the story of poor Johnsy, who is so sick that her days are counted. She lives in an ivy-covered house and she is convinced that by the time the last ivy leaf will fall she die as well. Behrman, Johnsy’s neighbor, who is also an artist, is determined to keep Johnsy’s spirit up. How will he convince her to keep fighting for her life? Will she survive after all?
B. J. Harrison started his Classic Tales Podcast back in 2007, wanting to breathe new life into classic stories. He masterfully plays with a wide array of voices and accents and has since then produced over 500 audiobooks. Now in collaboration with SAGA Egmont, his engaging narration of these famous classics is available to readers everywhere.
William Sidney Porter (1862-1919), known simply as O. Henry, was a prolific American author of humorous literary pieces. His fame came exceptionally quickly and he became a bestselling short story author. Among his most famous stories are the 'Cabbages and Kings', 'The Voice of the City', and 'Strictly Business.' As a result of the outstanding literature legacy O. Henry left behind, there is an annual American award named after him, which is granted to exceptional short stories.

This title is due for release on February 17, 2021
We'll send you an email as soon as it is available!