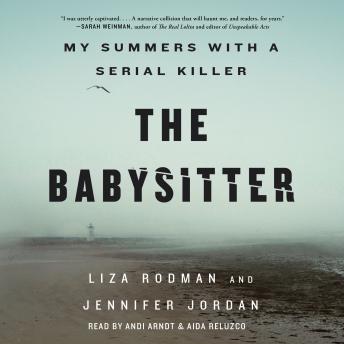 The Babysitter: My Summers with a Serial Killer

This chilling true story and “harrowing account of the evil that can lurk around the edges of girlhood” (Carolyn Murnick, author of The Hot One)—reminiscent of Ann Rule’s classic The Stranger Beside Me—follows a little girl longing for love who finds friendship with her charismatic babysitter, unaware that he is a vicious serial killer.

Growing up on Cape Cod in the 1960s, Liza Rodman was a lonely little girl. During the summers, while her mother worked days in a local motel and danced most nights in the Provincetown bars, her babysitter—the kind, handsome handyman at the motel where her mother worked—took her and her sister on adventures in his truck. He bought them popsicles and together, they visited his “secret garden” in the Truro woods. To Liza, he was one of the few kind, understanding, and safe adults in her life.

But there was one thing she didn’t know; their babysitter was a serial killer.

Though Tony Costa’s gruesome case made screaming headlines in 1969 and beyond, Liza never made the connection between her friendly babysitter and the infamous killer of numerous women, including four in Massachusetts, until decades later.

Haunted by nightmares and horrified by what she learned, Liza became obsessed with the case. Now, she and cowriter Jennifer Jordan reveal “a suspenseful portrayal of murderous madness in tandem with a child’s growing loneliness, neglect, and despair, a narrative collision that will haunt” (Sarah Weinman, author of The Real Lolita) you long after you finish it.

I appreciate the authors extensive research around the riveting story of Tony Costa and her experiences with him as a child was interesting. I did not appreciate the authors repeated recall of her family life, as unfortunate as it was, which after a while seemed little more than a plea for sympathy. Too much complaining and the over and over sorry tale of “poor me”

The book was well done. I think the author's writing on her family was hard to listen to. It was horrid but somehow came out sounding whiny. I enjoyed the sige by side narrative style and the story was fascinating.

I very much liked this book, although I don’t typically read crime stories. I thought it was written so well and was compelling throughout. It is the authors first book. It was researched with an investigative journalist and the investigative effort that went into building this story I thought was very impressive. The first part of the book is two narratives, hers as a child, snd Costas ( the killer), and she tells his narrative through his perspective, his feelings snd thoughts, as she imagined them to be, during the period of time she was a child and spent time with him. When she becomes an adult her mother tells her he is a serial killer. At that point on, she tells the rest of the story about him from her perspective as an adult going back and uncovering his actions, and motivations as she sees it from piecing together all the records. It’s fascinating. Costa thought of himself as a hippy dude and she gets into his mind which I found fascinating. He commits murder when he is high on LSD and other drugs. She tells the story of an abusive mother juxtaposed with the “ kindness” she found and craved through costa when she was a child, it can be heartbreaking and chilling. But that she survives her mother is really the grace here. She does contemplate how close she might have come to being Costas victim when she was a child, but surviving her mother’s abuse to me was the amazing thing. Not just survived but wrote about it and told a fascinating story. I recommend the book.

Great book! I couldn’t put it down