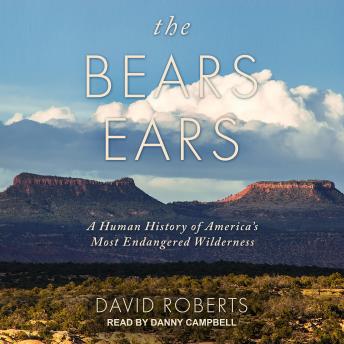 The Bears Ears: A Human History of America's Most Endangered Wilderness

A personal and historical exploration of the Bears Ears country and the fight to save a national monument.

The Bears Ears National Monument in southeastern Utah, created by President Obama in 2016 and eviscerated by the Trump administration in 2017, contains more archaeological sites than any other region in the United States. It's also a spectacularly beautiful landscape, a mosaic of sandstone canyons and bold mesas and buttes. This wilderness, now threatened by oil and gas drilling, unrestricted grazing, and invasion by Jeep and ATV, is at the center of the greatest environmental battle in America since the damming of the Colorado River to create Lake Powell in the 1950s.

In The Bears Ears, acclaimed adventure writer David Roberts takes listeners on a tour of his favorite place on earth as he unfolds the rich and contradictory human history of the 1.35 million acres of the Bears Ears domain. Weaving personal memoir with archival research, Roberts sings the praises of the outback he's explored for the last twenty-five years.

Bears Ears: A Human History of America's Most Endangered Wilderness

This title is due for release on February 23, 2021
We'll send you an email as soon as it is available!