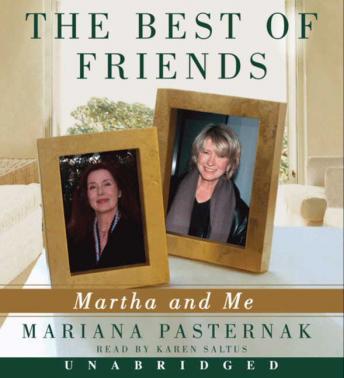 The Best of Friends: Martha and Me

Set in a world of luxury and power, this is the tell-all story of two remarkable women and a friendship that changed both their lives forever.

For more than two decades, Mariana Pasternak and Martha Stewart were nearly inseparable. They first met over a garden gate in Westport, Connecticut, two suburban wives wedded to successful men but with grand aspirations of their own. Their bond only deepened after their marriages ended in divorce. Struggling as a single mother, but drawn into a seductive world of privilege and adventure, Pasternak watched with admiration as her friend built an empire that would make her one of the richest women in America.

A European 'migr' with sophisticated tastes, Pasternak helped to smooth Stewart's rough edges, while Stewart drew Pasternak into a rarefied world, where together they navigated the sometimes hilarious and often difficult challenges of being single. The depth of their friendship not only benefited them both but also influenced how they defined themselves, through good times and bad. Friendship between women is never simple and this one was no exception.

With Stewart's newfound success and Pasternak's zest for adventure, the two women's developing friendship was based on their mutual quest for wonder and discovery. They rode horses through the desert dunes of Egypt, hiked the winding Inca Trail to the mysterious Machu Picchu, paddled at night in dugout canoes through the Amazonian jungle. They toasted the good life with thin-stemmed champagne glasses and sipped 'jade dew' green tea in Martha's Turkey Hill Kitchen. This was no ordinary life.

Over time, money, men, and the arrogance of wealth frayed the bonds they had built so carefully for over twenty years. The final break came when Pasternak was called as a witness in the high-profile trial that brought about Stewart's conviction and prison sentence. Pasternak's deeply personal memoir tells the story of their friendship with honesty and candor, reflecting on the power of such intense relationships to change our lives, and the devastating aftermath when they end.

Best of Friends: Martha and Me

This title is due for release on March 16, 2010
We'll send you an email as soon as it is available!