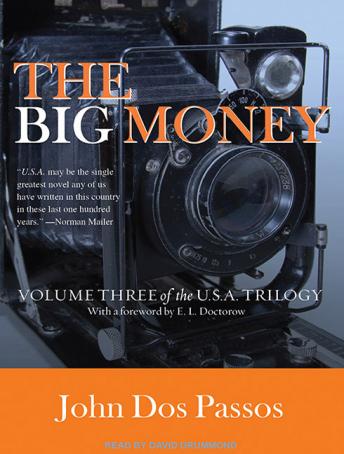 The Big Money completes John Dos Passos's three-volume 'fable of America's materialistic success and moral decline' (American Heritage) and marks the end of 'one of the most ambitious projects that an American novelist has ever undertaken' (Time). Here we come back to America after the war and find a nation on the upswing. Industrialism booms. The stock market surges. Lindbergh takes his solo flight. Henry Ford makes automobiles. From New York to Hollywood, love affairs to business deals, it is a country taking the turns too fast, speeding toward the crash of 1929.

Ultimately, the novels of the U.S.A. trilogy-both individually and as a whole-paint a sweeping portrait of collective America and showcase the brilliance and bravery of one of its most enduring and admired writers.

This title is due for release on December 27, 2010
We'll send you an email as soon as it is available!