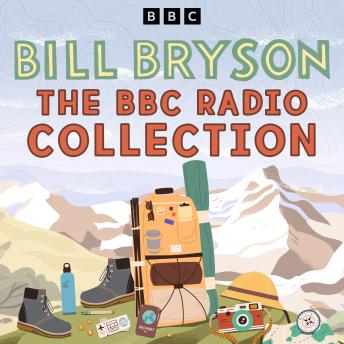 The Bill Bryson BBC Radio Collection: Divided by a Common Language, Journeys in English and more

An anthology of BBC Radio documentaries featuring the bestselling author

Bill Bryson is the world's funniest travel writer, and a master of comic observation. His hugely popular books, spanning topics from linguistics to Shakespeare to the human body, have sold over 16 million copies and been translated into 30 languages, and his 2003 science book A Short History of Nearly Everything won the prestigious Aventis and Descartes prizes.

This sparkling collection features seven BBC Radio programmes that collectively illuminate his personal passions. In The Art of Travel, he talks to Annette Kobak about his memorable journeys around the USA; while in the 6-part series Divided by a Common Language, he scours American history in an attempt to find out why Americans talk and behave differently from British people. Journeys in English, based on his acclaimed book Mother Tongue, sees him romping through the history of Britain in six episodes, to reveal how English became the complex yet world-beating language it is today.

Ramblings: Windsor Great Park finds Bill heading out across the royal park in the company of Clare Balding, as he discusses his love for walking and exploring. As a castaway on Desert Island Discs, he shares the soundtrack of his life with Sue Lawley; and in With Great Pleasure, he selects some of his favourite writing, including Evelyn Waugh's Scoop, a Hardy Boys classic and Three Men in a Boat. Finally, in Bookclub, he chats to James Naughtie and an audience of readers about A Short History of Nearly Everything.

This title is due for release on April 6, 2023
We'll send you an email as soon as it is available!