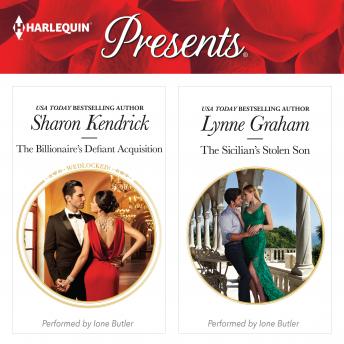 A very seductive kind of deal
Conall Devlin is a ruthless man ready to achieve ultimate success. So, to acquire the missing piece to his property portfolio, he's willing to accept an unusual term of the contract…taming his client's wayward daughter!
Party girl Amber Carter appears to live a life of luxurious frivolity, but deep down she feels lost and alone in her material world. Until one morning her new landlord turns up, every inch of him pinstriped-clad perfection, offering her an ultimatum: either Amber is thrown out onto the streets or she accepts her first ever job—being at his beck and call day and night…

At the Sicilian's bidding…and bedding!
The only link Jemima Barber has to her troubled late twin sister is her nephew. So when the boy's father storms into their lives to reclaim the child that was stolen from him, Jemima lets the forbidding Sicilian believe she is her smooth seductress of a sister.&nbs...