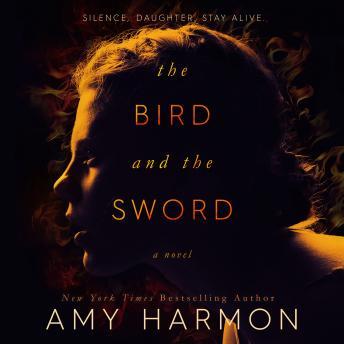 The Bird and the Sword

#1 of The Bird and the Sword Chronicles

Swallow, daughter, pull them in, those words that sit upon your lips. Lock them deep inside your soul, hide them til they've time to grow. Close your mouth upon the power, curse not, cure not, til the hour. You won't speak and you won't tell, you won't call on heaven or hell. You will learn and you will thrive. Silence, daughter. Stay alive.

The day my mother was killed, she told my father I wouldn't speak again, and she told him if I died, he would die too. Then she predicted the king would sell his soul and lose his son to the sky. My father has a claim to the throne, and he is waiting in the shadows for all of my mother's words to come to pass. He wants desperately to be king, and I just want to be free. But freedom will require escape, and I'm a prisoner of my mother's curse and my father's greed. I can't speak or make a sound, and I can't wield a sword or beguile a king. In a land purged of enchantment, love might be the only magic left, and who could ever love . . . a bird?

This was a story I imagined writing years ago and I'm so thankful this talented writer created it and brought it to life.

I loved this story and the narration. It sort of swept me away and while at times, I was worried that Lark would prove timid, the story resolved well. I really enjoyed this book.

I loved this book. i started on the second book in this series. Its a must read!!!

This read was a captivating, charming, delightful, whimsical and enthralling journey. I found myself continuously falling into the characters and imagining where and how I would be in the story alongside them. Would I be a teller that uses magical words compelling people and things to do what I speak, or a changer that can shift into any animal under the moon and sun, or a spinner turning any object to another, or a healer with the ability to cure broken bodies? I also enjoyed the discovery of self that the character Lark was sent on throughout the book. She had an amazing blur of strength, innocence, naivety, and sincerity as well as, an acknowledgment of truth and practicality. I also enjoyed the simplicity of her beauty. Her character was believable, but just out of reach which I truly enjoyed. Another plus was poetic flow of the book. The small lyrics of the teller weren’t too much. They were properly used and properly timed throughout the book. “Swallow daughter, pull them in, those words that sit upon your lips. Lock them deep inside your soul; hide them ‘til they’ve time to grow. Close your mouth upon the power, cures not, cure not, ‘til the hour. You won’t speak and you won’t tell, you won’t call on heav’n or hell. You will learn and you will thrive. Silence, daughter. Stay alive.” Amy Harmon will be in my circle of authors (of must follows) from this point on.

Who let this woman use the word bracket so many times?

Fantastic book! This book was so captivating that I couldn't stop listening and was sad when it was over. I listened to it again a day after it was finished! I loved the story and the expressive narrator!

Beautifully and tenderly written, a great balance of fantasy plot and romance - one which isn't overdone. The right dose of feminism too.

Poetic writing and a riveting story. The first book I've truly LOVED in over a year.

This was an awesome book!!!! I loved the narration, and the book! I'm really glad I picked this book.

From start to finish, The Bird and the Sword was the perfect Fantasy novel. With poetic writing and strong character development, Harmon left me in awe. This novel had a strong sense of direction throughout. Instead of employing cheap tropes and other overused literary tactics to falsely enamor the reader, Harmon let her uniquely lyrical writing style carry the story. To say that this audiobook was a joy to hear what would be a severe understatement. The Fantasy genre has a tendency to become unnecessarily complex. Authors frequently feel that they have to conduct purposeful world building, which can feel forced. Harmon’s world developed through her characters, not around them. They weren’t just in the world, but also of it. The Bird and the Sword was beautiful in its simplicity. Lark, the protagonist, proved that heroines can be heroes and heroes can be weak. A story’s hero isn’t always the loudest voice in the room, the physically strongest, or “the chosen one”. Sometimes the hero of a story is someone who said the wrong thing at the wrong time and set the wheels of fate in motion. Forgive me for waxing poetic, but The Bird and the Sword is quite possibly the most beautiful story I’ve heard all year. Lark will forever be one of my most beloved characters. This was one of the few times I can definitively say that I am 100% satisfied as a reader. Harmon tied everything up so neatly, eloquently connecting all loose strands, and the ending left me speechless. There is no question in my mind as to how or why The Bird and the Sword is so highly rated on Goodreads. Even from the very beginning, I knew I was listening to something magnificent. Unbelievably, that magnificence never wavered. If you’re in search of a breathtaking fantasy, look no further than The Bird and the Sword. Narration review: The Bird and the Sword partially owes Trina Nishimura for its powerful impact. Nishimura delivered a performance perfectly-suited for Amy Harmon’s work. Her narration elegantly complemented the musicality of Harmon’s writing. Furthermore, her voice had a hushed reverence throughout the entire audiobook which held my attention like a sacred prayer. Nishimura deserves much commendation for this performance. This audiobook was graciously gifted to me by its publisher, Audiobooks.com Publishing, in exchange for a review containing my honest thoughts and opinions. Thanks, Audiobooks.com!

Loved this book! The narration was really great, too.