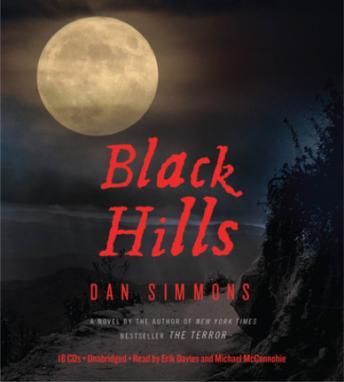 When Paha Sapa, a young Sioux warrior, 'counts coup' on General George Armstrong Custer as Custer lies dying on the battlefield at the Little Bighorn, the legendary general's ghost enters him - and his voice will speak to him for the rest of his event-filled life.

Seamlessly weaving together the stories of Paha Sapa, Custer, and the American West, Dan Simmons depicts a tumultuous time in the history of both Native and white Americans. Haunted by Custer's ghost, and also by his ability to see into the memories and futures of legendary men like Sioux war-chief Crazy Horse, Paha Sapa's long life is driven by a dramatic vision he experienced as a boy in his people's sacred Black Hills. In August of 1936, a dynamite worker on the massive Mount Rushmore project, Paha Sapa plans to silence his ghost forever and reclaim his people's legacy-on the very day FDR comes to Mount Rushmore to dedicate the face.

When I ordered this book, I wasn't sure what to expect. I found the main character to be enthralling and I loved how the writer painted a picture of America in the late 1800s and early 1900s from the view of a disenfranchised Native American. Its a long story, but I was never bored with it.

Compelling story of a fictional character who is an eyewitness to events from American history. Paha Sapa is subject to the spiritual side that is currently popularly associated with the Native Americans and the narrative of his visions and dreams can require a little patience. All in all however, the story is credible and informative about events of the time, actual historical characters involved and Lakota culture. Probably not a "quick listen" for entertainment purposes.

This title is due for release on February 24, 2010
We'll send you an email as soon as it is available!