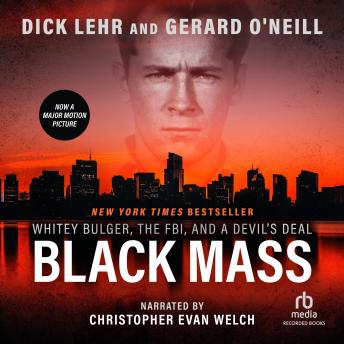 Black Mass: Whitey Bulger, the FBI, and a Devil's Deal

James 'Whitey' Bulger became one of the most ruthless gangsters in US history, and all because of an unholy deal he made with a childhood friend. John Connolly a rising star in the Boston FBI office, offered Bulger protection in return for helping the Feds eliminate Boston's Italian mafia. But no one offered Boston protection from Whitey Bulger, who, in a blizzard of gangland killings, took over the city's drug trade. Whitey's deal with Connolly's FBI spiraled out of control to become the biggest informant scandal in FBI history. Black Mass is a New York Times and Boston Globe bestseller, written by two former reporters who were on the case from the beginning. It is an epic story of violence, double-cross, and corruption at the center of which are the black hearts of two old friends whose lives unfolded in the darkness of permanent midnight.

Great non-fiction/true crime. A must.

My misunderstanding of this book’s subject matter. And it’s not at all to my taste.

Different. More of a historical event rather than a story. Characters were well created and and narrator made them come to life. I am surprised the FBI allowed this book to be published. Shown a shady light on the organization. Guess it is true absolute power corrupts absolutely.

I was riveted throughout the narrative of this well-written and narrated book. But it ended abruptly, and the proceeding epilogue was complicated and hard to follow (actually reading it would probably be fine). I would recommend this to a friend interested in the subject matter.

interesting but dont think I will listen again

after watching the movie a few years back ... and then this book popping up in my vip selections i just had to read it ... and it didn't disappoint; in my opinion the book places you in the time and place of this events and inside the minds and souls of this individuals ... i thought it did a great job of describing the atrocities the gang did without glorification of the mobster life style.

Very intriguing book about a topic I knew little about. The narrator did an excellent job. Would totally recommend.

What excellently written and narrated book about the infamous Boston Crime UnderLord James aka ‘Whitey’ Bulger and the FBI’s unholy alliance with him to bring down the Boston Mafia. This book is filled with the details of the rise and fall of Whitey Bulger and his henchmen Steve aka ‘Rifleman’ Flemmi as well as disgraced former FBI agent John Connelly. A complicated tale of deceit, ruthlessness, and murder written in an understandable way.

great time with the book

Wonderfully gripping and well narrated, I was caught as soon as the novel started and couldn't put it down!

This title is due for release on December 7, 2012
We'll send you an email as soon as it is available!