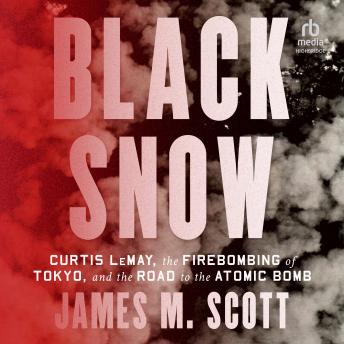 Black Snow: Curtis LeMay, the Firebombing of Tokyo, and the Road to the Atomic Bomb

Seven minutes past midnight on March 10, 1945, nearly 300 American B-29s thundered into the skies over Tokyo. Their payloads of incendiaries ignited a firestorm that reached up to 2,800 degrees, liquefying asphalt and vaporizing thousands; sixteen square miles of the city were flattened and more than 100,000 men, women, and children were killed.

Black Snow is the story of this devastating operation, orchestrated by Major General Curtis LeMay, who famously remarked: 'If we lose the war, we'll be tried as war criminals.' James M. Scott reconstructs in granular detail that horrific night, and describes the development of the B-29, the capture of the Marianas for use as airfields, and the change in strategy from high-altitude daylight 'precision' bombing to low-altitude nighttime incendiary bombing. Most importantly, the raid represented a significant moral shift for America, marking the first time commanders deliberately targeted civilians-which helped pave the way for the atomic bombing of Hiroshima and Nagasaki five months later.

Drawing on first-person interviews with American pilots and bombardiers and Japanese survivors, air force archives, and oral histories never before published in English, Scott delivers a harrowing and gripping account, and his most important and compelling work to date.

This title is due for release on September 6, 2022
We'll send you an email as soon as it is available!