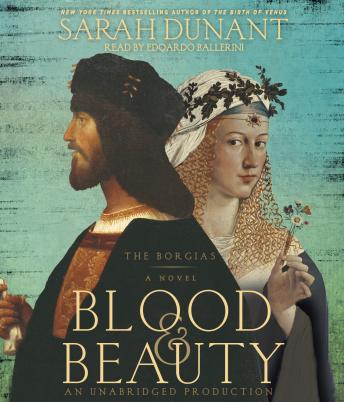 Blood & Beauty: The Borgias; A Novel

The New York Times bestselling author of the acclaimed Italian Renaissance novels—The Birth of Venus, In the Company of the Courtesan, and Sacred Hearts—has an exceptional talent for breathing life into history. Now Sarah Dunant turns her discerning eye to one of the world’s most intriguing and infamous families—the Borgias—in an engrossing work of literary fiction.

By the end of the fifteenth century, the beauty and creativity of Italy is matched by its brutality and corruption, nowhere more than in Rome and inside the Church. When Cardinal Rodrigo Borgia buys his way into the papacy as Alexander VI, he is defined not just by his wealth or his passionate love for his illegitimate children, but by his blood: He is a Spanish Pope in a city run by Italians. If the Borgias are to triumph, this charismatic, consummate politician with a huge appetite for life, women, and power must use papacy and family—in particular, his eldest son, Cesare, and his daughter Lucrezia—in order to succeed.

Cesare, with a dazzlingly cold intelligence and an even colder soul, is his greatest—though increasingly unstable—weapon. Later immortalized in Machiavelli’s The Prince, he provides the energy and the muscle. Lucrezia, beloved by both men, is the prime dynastic tool. Twelve years old when the novel opens, hers is a journey through three marriages, and from childish innocence to painful experience, from pawn to political player.

Stripping away the myths around the Borgias, Blood & Beauty is a majestic novel that breathes life into this astonishing family and celebrates the raw power of history itself: compelling, complex and relentless.

“Dunant transforms the blackhearted Borgias and the conniving courtiers and cardinals of Renaissance Europe into fully rounded characters, brimming with life and lust.”
—The New York Times Book Review

“Like Hilary Mantel with her Cromwell trilogy, [Sarah] Dunant has scaled new heights by refashioning mythic figures according to contemporary literary taste. This intellectually satisfying historical saga, which offers blood and beauty certainly, but brains too, is surely the best thing she has done to date.”
—The Miami Herald

“Compelling female players have been a characteristic of Dunant’s earlier novels, and this new offering is no exception. . . . The members of this close-knit family emerge as dynamic characters, flawed but sympathetic, filled with fear and longing.”
—The Seattle Times

“Dazzling . . . a triumph on an epic scale . . . filled with rich detail and page-turning drama.”
—BookPage

This title is due for release on July 16, 2013
We'll send you an email as soon as it is available!