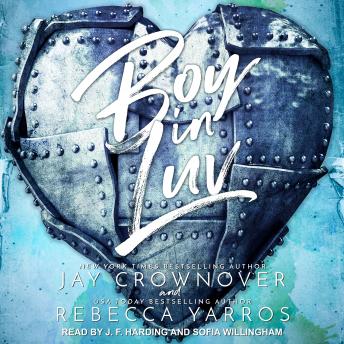 Distance sure as hell made his heart grow fonder . . . But it shattered hers into a million pieces.

Who falls head over heels in love in a week? Langley did, and she's regretted it every day since she handed her heart to a boy with too many secrets and too much baggage. Iker doesn't fit into Langley's world, and he made it clear he doesn't want to. He left before she even got a chance to try and change his mind. Langley's spent the last nine months healing her heart and making big plans for the future. Plans that absolutely don't include Iker… even though he's back, looking better than ever, and saying all the right things.

Iker Alvarez knows he made the biggest mistake of his life.

As soon as Iker walked away from Langley, claiming it was for her own good, he knew he screwed up. He left her so she wouldn't worry about him when he deployed, so she wouldn't waste her time waiting around for a guy who was never going to be good enough for her. Only, nine months and a deployment later, Iker still can't get Langley out of his head.

What a perfect way to end the duet. I loved it, I want more how is it already over. Langley is ACES, I lovedddd that she stuck to her guns she was hurt and she wasn’t just going to let him come back in like nothing happened. Iker realized he messed up, he knew he did but I don’t think he realized just how hurt Langley was going to be. He really puts in the work to show her he wants her and is willing to do whatever it takes for just a second chance. I really enjoyed the scenes with Langley and her father, Iker and her father. I do wish we had one good blow up scene with the step mother only because that would have been epic. Lmao but it was a great Duet. And again the narrators were perfect for these characters. Still kicking myself for waiting to listen because I devoured these 2 books in a day.

I love the connection between Langley and Iker also her and her dad. I love her heart.

I enjoyed Girl In Luv better, but this story is good too. GIL was more fun. BIL is more intense and serious. Langley and Iker have a strong connection and are willing to do what it takes to be together. I still enjoyed them while reading this story. I appreciate how Langley and her dad are stronger in this story when it comes to sticking up for themselves.