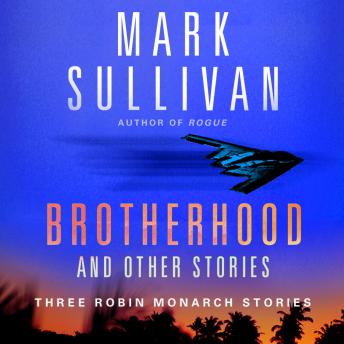 From the author of the bestselling Beneath a Scarlet Sky comes Robin Monarch––called 'one of the most compelling heroes since Jason Bourne' (Lisa Gardner)–– in three propulsive, nerve-wracking stories.

Robin Monarch is a man with a complicated, secret past and a very grim future. Currently locked up in the USDB—the military supermax prison known as Leavenworth—the CIA offers Monarch one shot at freedom and a pardon. All he has to do is steal something from a highly secure position at ground zero of a war-zone, and escape undetected.

But this isn't Monarch's first time at this sort of dance. As an orphaned teen scraping for survival on the streets of Buenos Aires he was involved with the Fraternidad de Ladrones—the Brotherhood that schooled him in the art of deception and survival. But his initiation rite requires him to use all the skills he has learned, and all the nerve he possesses, to steal something of great value under impossible circumstances. In both cases, success will require everything he has—skill, wit, endurance, and intelligence—and means survival and freedom. And failure…failure is to lose all that he has.

Monarch is now an agent for the CIA, and is called upon to use his unique skills to kidnap and interrogate a Russian nuclear scientist suspected of selling technology to the Iranians. But that's only part of the challenge—one that many trained agents could handle effectively. They've called upon Monarch because, after the interrogation, he must return the scientist without the Russians, the Iranians, or the scientist himself ever knowing he was taken.

Monarch's abilities––and his nerve––are both tested when he's sent deep into the jungles of the Congo, into the encampment of an army of boy-soldiers under the leadership of a man calling himself Lieutenant Zed. Undercover as a black market diamond dealer, Monarch's job is to steal the largest, most perfect diamond ever seen, before Zed is able to sell it and use the proceeds to continue waging war. But as any thief could tell you, getting in is the easy part. Getting out, however, from the heart of an unfamiliar jungle with a hostile ‘army' at your back, requires more skill and luck that even Robin Monarch can count on.