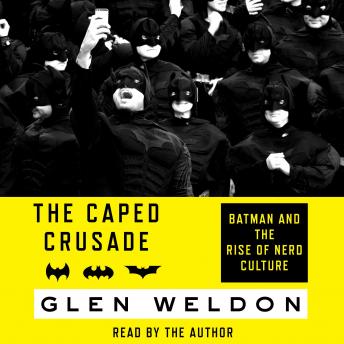 The Caped Crusade: Batman and the Rise of Nerd Culture

“A roaring getaway car of guilty pleasures” (The New York Times Book Review), Glen Weldon’s The Caped Crusade is a fascinating, critically acclaimed chronicle of the rises and falls of one of the world’s most iconic superheroes and the fans who love him—now with a new afterword.

Since his debut in Detective Comics #27, Batman has been many things: a two-fisted detective; a planet-hopping gadabout; a campy Pop Art sensation; a pointy-eared master spy; and a grim ninja of the urban night. Yet, despite these endless transformations, he remains one of our most revered cultural icons. In this “smart, witty, and engrossing” (The Wall Street Journal) cultural critique, NPR contributor and book critic Glen Weldon provides “a sharp, deeply knowledgeable, and often funny look at the cultural history of Batman and his fandom” (Chicago Tribune) to discover why it is that we can’t get enough of the Dark Knight.

For nearly a century, Batman has cycled through eras of dark melodrama and light comedy and back again. How we perceive his character, whether he’s delivering dire threats in a raspy Christian Bale growl or trading blithely homoerotic double entendres with Robin the Boy Wonder, speaks to who we are and how we wish to be seen by the world. It’s this endless adaptability that has made him so lasting, and ultimately human.

But it’s also Batman’s fundamental nerdiness that uniquely resonates with his fans and makes them fiercely protective of him. As Weldon charts the evolution of Gotham’s Guardian from Bob Kane and Bill Finger’s hyphenated hero to Christopher Nolan’s post-9/11 Dark Knight, he reveals how this symbol of justice has made us who we are today and why his legacy remains so strong. The result is “possibly the most erudite and well-researched fanboy manifesto ever” (Booklist). Well-researched, insightful, and engaging, The Caped Crusade, with a new afterword by the author, has something for everyone: “If you’re a Bat-neophyte, this is an accessible introduction; if you’re a dyed-in-the-Latex Bat-nerd, this is a colorfully rendered magical history tour redolent with nostalgia” (The Washington Post).

I’m a huge fan of Pop Culture Happy Hour’s Glen Weldon which is what prompted me to purchase his audiobook despite the fact I’m not in any way a Batman/superhero nerd (though I do have fond memories of watching the ‘60’s TV show with my older brother). The audiobook did not disappoint – it was chocked full of interesting details and Glen’s narration was a hoot. My favorite part was the ending – not because it was the end, but because Glen’s description of his photo op with the Adam West-Batman attendee at the San Diego Comic-Con resulted in me happily tearing up after which I broke into a beaming, wrinkle-inducing smile as I listened to his warm and breezily-read Acknowledgments. Now I’m off to purchase the Kindle book so I can re-listen to the audiobook while I read along to capture what I missed my first time through.

This title is due for release on March 22, 2016
We'll send you an email as soon as it is available!