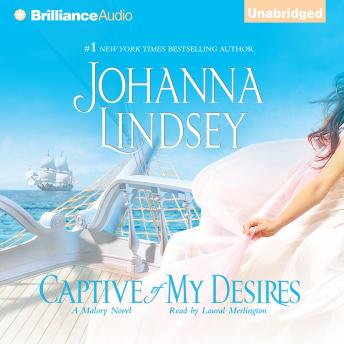 Captive of My Desires

Johanna Lindsey sweeps readers into the privileged world of English aristocrats and the exotic haunts of Caribbean treasure hunters in a novel of passion and romantic adventure featuring the incomparable Malorys -- a family of dashing rogues, spirited ladies, and rakehell adventurers. Now American rogue Drew Anderson meets his match when his brother-in-law James Malory introduces the daughter of a pirate to London society.
Devastated by her mother's death, eighteen-year-old Gabrielle Brooks sets sail from England to a Caribbean island in search of her estranged father. But instead of encountering a distinguished merchant ship's captain, she discovers her father has become a pirate! After spending three wonderful years sailing and treasure hunting with him, Gabrielle is dismayed when her father decides she must return to London to find a proper husband. His old friend James Malory will sponsor her in polite society.
In London, Gabrielle is escorted to balls and parties by James Malory's wife, Georgina, and her brother, Drew Anderson, a dashing American sea captain who is visiting. Though drawn to Gabrielle's fiery beauty, Drew, a fun-loving rogue, wants nothing to do with a young woman hunting for a husband. Incensed by Drew's indifference, Gabrielle is determined to win his attentions. But when Drew embroils her in a scandal the night before he's to sail back to America, Gabrielle vows revenge. Enlisting the help of her father's pirate cronies, Gabrielle commandeers Drew's ship and takes him prisoner. But as passion runs high on their sea voyage, it becomes difficult to tell who is truly the captor and who is the captive.
With the humor, lovable characters, and romantic intensity that have distinguished Johanna Lindsey's seven previous Malory novels and placed them in the ranks of the best-loved and most widely read romantic novels of our time, Captive of My Desires tells a passionate love story that will capture your heart and never let go....

Captive of My Desires

This title is due for release on June 20, 2006
We'll send you an email as soon as it is available!