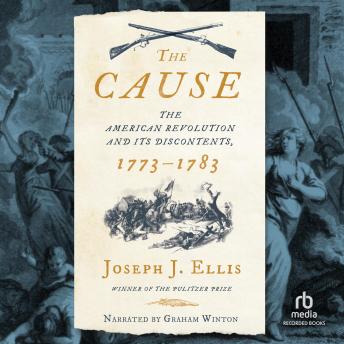 The Cause: The American Revolution and its Discontents, 1773-1783

In one of the most “exciting and engaging” (Gordon S. Wood) histories of the American founding in decades, Pulitzer Prize–winning historian Joseph J. Ellis offers an epic account of the origins and clashing ideologies of America’s revolutionary era, recovering a war more brutal, and more disorienting, than any in our history, save perhaps the Civil War.

For more than two centuries, historians have debated the history of the American Revolution, disputing its roots, its provenance, and above all, its meaning. These questions have intrigued Ellis—one of our most celebrated scholars of American history—throughout his entire career. With this
much-anticipated volume, he at last brings the story of the revolution to vivid life, with “surprising relevance” (Susan Dunn) for our modern era. Completing a trilogy of books that began with Founding Brothers, The Cause returns us to the very heart of the American founding, telling the military and
political story of the war for independence from the ground up, and from all sides: British and American, loyalist and patriot, white and Black.

Taking us from the end of the Seven Years’ War to 1783, and drawing on a wealth of previously untapped sources, The Cause interweaves action-packed tales of North American military campaigns with parlor-room schemes and chicanery, creating a thrilling narrative that brings together a cast of
familiar and long-forgotten characters. Here Ellis recovers the stories of Catharine Littlefield Greene, wife of Major General Nathanael Greene, the sister among the “band of brothers”; Thayendanegea, a Mohawk chief known to the colonists as Joseph Brant, who led the Iroquois Confederation against the
Patriots; and Harry Washington, the enslaved namesake of George Washington, who escaped Mount Vernon to join the British Army and fight against his former master.

Countering popular histories that romanticize the “Spirit of ’76,” Ellis demonstrates that the rebels fought under the mantle of “The Cause,” a mutable, conveniently ambiguous principle that afforded an umbrella under which different, and often conflicting, convictions and goals could coexist. Neither an
American nation nor a viable government existed at the end of the war. In fact, one revolutionary legacy regarded the creation of such a nation, or any robust expression of government power, as the ultimate betrayal of The Cause. This legacy alone rendered any effective response to the twin tragedies
of the founding—slavery and the Native American dilemma—problematic at best.

Written with the vivid and muscular prose for which Ellis is known, and with characteristically trenchant insight, The Cause marks the culmination of a lifetime of engagement with the founding era. A landmark work of narrative history, it challenges the story we have long told ourselves about our origins as a people, and as a nation.

Masterful and compelling. For those listeners that have a solid understanding of US history it will be even more insightful and inspiring.

Ellis is one of my favorite writers, so I’m certainly biased. To me, he absolutely knocked it out of the park again. Another book dedicated to a deeper discussion on issues often glossed over by other historians. I was left with a fuller understanding of the historic decisions that have impacted our nation for centuries. As usual, he offers phenomenal insight and analysis which force me to view new and old information through a prism I never could have conjured on my own. I always have a better understanding of historical events after a J.J. Ellis book, which is why I’ll listen to and read anything he writes.

I totally agree with Anonymous' view of The Cause. I taught this topic for years and I still learned things. Other areas were put into contexts that I hadn't considered before. Characters not usually given their due are presented in a way that makes you want to find out more about them. Definitely a 5 star book.