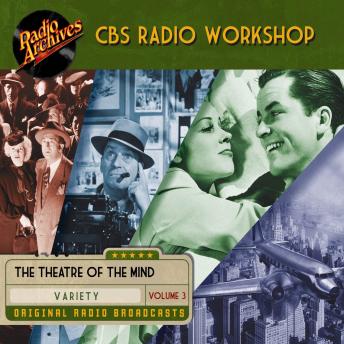 Volume 4 of CBS Radio Workshop includes "All Is Bright", a history of the famous Christmas song; "1489 Words", based on a text piece by Thomas Wolfe and adapted by Jerry Goldsmith; a two-part adaptation of Frederick Pohl and Cyril M. Cornbluth's The Space Merchants; Archibald MacLeish's "Air Raid", the series' only re-broadcast, which had first been written for the 1938 Columbia Workshop; Henry Fritch's "The Endless Road", about a road to nowhere being built in the Caribbean and the corruption surrounding its construction; "A Dog's Life", which was the actual recordings of a pound dog being adopted raised by a man; Elliott Lewis wrote, directed and performed "Nightmare", about a man who suffers from nightmares so bad that he can no longer distinguish sleep from reality.