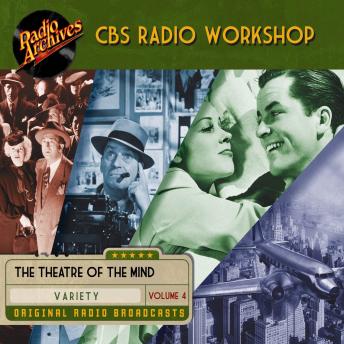 Volume 5 of CBS Radio Workshop includes "Epitaphs", from Edgar Lee Master's Spoon River Anthology; Norman Dello Joio's "Meditations On Ecclesiastes"), which won the 1957 Pulitzer Prize for music, conducted on the program by Alfredo Antonini; James Thurber's "You Could Look It Up"; Robert Heinlein co-adapted his short story "The Green Hills of Earth; Edgar Allan Poe's "Never Bet the Devil Your Head", a satirical attack on transcendentalism; an adaptation of E. M. Forster's "The Celestial Omnibus"; Richard Durham's "Sweet Cherries In Charleston", which tells the story of the aborted 1822 slave rebellion in Charleston, South Carolina; an adaptation of "Young Man Axelbrod" by Sinclair Lewis, a critic of American society who is probably best remembered for It Can't Happen Here, about the election of a Fascist as the American president.