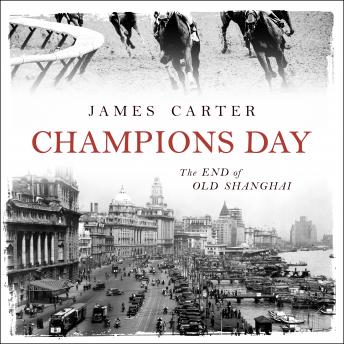 How a single day revealed the history and foreshadowed the future of Shanghai.

It is November 12, 1941, and the world is at war. In Shanghai, just weeks before Pearl Harbor, thousands celebrate the birthday of China's founding father, Sun Yat-sen, in a new city center built to challenge European imperialism. Across town, crowds of Shanghai residents from all walks of life attend the funeral of China's wealthiest woman, the Chinese-French widow of a Baghdadi Jewish businessman whose death was symbolic of the passing of a generation that had seen Shanghai's rise to global prominence. But it is the racetrack that attracts the largest crowd of all. At the center of the International Settlement, the heart of Western colonization-but also of Chinese progressivism, art, commerce, cosmopolitanism, and celebrity-Champions Day unfolds, drawing tens of thousands of Chinese spectators and Europeans alike to bet on the horses.

In a sharp and lively snapshot of the day's events, James Carter recaptures the complex history of Old Shanghai. Champions Day is a kaleidoscopic portrait of city poised for revolution.