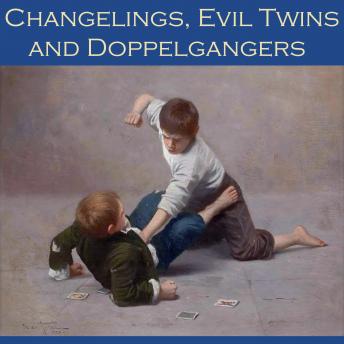 Changelings, Evil Twins and Doppelgangers: An Anthology of Polemic Tales

One of the most enduring themes in great literature is the eternal struggle between good and evil - often embodied in such devices as the werewolf, the doppelganger and the evil twin.

This anthology presents a selection of the greatest short stories whose tension and drama revolves around the conflict of good and evil.

'The Grinding of the Mills' by Morgan Robertson
'The Twins' by Bessie Kyffin-Taylor
'The Ghost at the Blue Dragon' by William J. Wintle
'Absolute Evil' by Nathaniel Hawthorne
'The Mysterious Card' and 'The Mysterious Card Unveiled' by Cleveland Moffett
'The Wolf Book' by Henry Chapman Mercer
'The Strange Case of Dr. Jekyll and Mr. Hyde' by Robert Louis Stevenson
'The Mark of the Beast' by Rudyard Kipling
'Juxtapositions' by Stacy Aumonier
'Pigeons from Hell' by Robert E. Howard
'Double Demon' by W. F. Harvey
'The Dust That Was Barren' by P. C. Wren
'The Gull' by F. Anstey
'The Necromancer' by Arthur Gray
'A Pastoral Horror' by Arthur Conan Doyle
'The Three Sisters' by W. W. Jacobs
'The Brothers' by Stacy Aumonier
'Mrs. Raeburn's Waxwork' by Eleanor Smith

Changelings, Evil Twins and Doppelgangers: An Anthology of Polemic Tales

This title is due for release on March 5, 2016
We'll send you an email as soon as it is available!