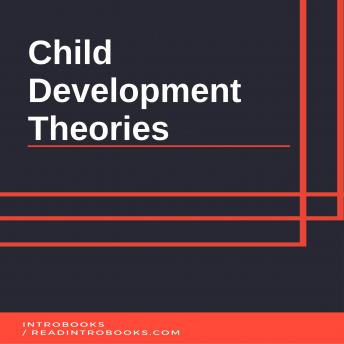 Child development theories are all about how children grow and change during the course of childhood. Child development theories focus on different aspects of development of a child including emotional, social and cognitive growth. Child faces conflicts during each stage which plays an important role in the course of development. Subsequently and successfully each stage helps to grow a healthy adult personality. Consider if a child fails to resolve the conflicts of a particular age it may have an influence on adult behaviour. Children were viewed simply a small versions of adult where little attention was paid to many advances in their intellectual abilities and physical growth. A theory of development deals with three things. First, it should explain changes among different aspects of development. Second, it should explain changes over time within individual or several areas of child development. Third, it should explain these changes. No one theory has proved enough to explain learning or development. There are number of theories which play a major role in child development. This kind of theories can be useful to consider. Many parents take help of these theories to understand about the child development. By understanding each theoretical approach, different parts of the theory can be used and it is also an useful way to further your understanding. These kinds of development theories may help you to interpret your observation. Different development theories are associated with different specialist people. For example, psychological and emotional developments are connected with Erik Erikson, Mary Ainswoth and john Bowlby. Cognitive development is associated with theorist Piaget, Vygootsky and Skinner. They developed theories based on cognitive development and a variety of approaches of teaching have since grown from that work and the work of other theorist. Other approach concerned with cognitive development includes 'behaviourism' 'information processing' and 'constructivism'. After that by understanding language theory can build a foundation for your own thoughts and beliefs on how you think children develop their communication skills and language. The theorist who discussed here are those Lev Vygotsky, BF Skinner, John Watson, Albert Bandura and Noam Chomsky. There are number of theorists who are clearly linked with social development. In addition to Erik Erikson, John Bowlby and Mary Ainsworth whose ideas where discussed under 'emotional and psychological development'. The American theorist and researcher arnoid Gesell was an early proponent of maturation theory. He found the nature's role in children's development. There is also a long running debate which is about whether our biological heritage. This was just a brief introduction to the child development theories.

This title is due for release on April 15, 2016
We'll send you an email as soon as it is available!