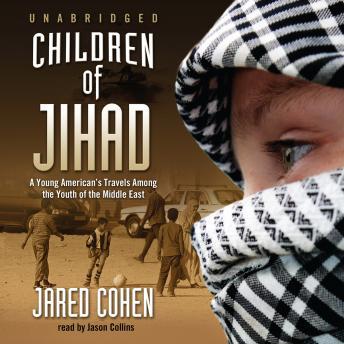 Children of the Jihad: A Young American's Travels among the Youth of the Middle East

Defying foreign government orders and interviewing terrorists face-to-face, a young American tours hostile lands to learn about Middle Eastern youth—and uncovers a subculture that defies every stereotype.
Classrooms were never sufficient for Jared Cohen; he wanted to learn about global affairs by witnessing them firsthand. While studying on a Rhodes Scholarship at Oxford, he took a crash course in Arabic, read voraciously on the history and culture of the Middle East, and in 2004 he embarked on the first of a series of incredible journeys to the Middle East. In an effort to try to understand the spread of radical Islamist violence, he focused his research on Muslim youth. The result is Children of Jihad, a portrait of paradox that probes much deeper than any journalist or pundit ever could.
Written with candor and featuring dozens of eye-opening anecdotes, Cohen’s account begins in Lebanon, where he interviews Hezbollah members at, of all places, a McDonald’s. In Iran, he defies government threats and sneaks into underground parties, where bootleg liquor, Western music, and the Internet are all easy to access. His risky itinerary also takes him to a Palestinian refugee camp in southern Lebanon, borderlands in Syria, the insurgency hotbed of Mosul, and other frontline locales. At each turn, he observes a culture at an uncanny crossroads: Bedouin shepherds with satellite dishes to provide Western TV shows, young women wearing garish makeup despite religious mandates, teenagers sending secret text messages and arranging illicit trysts. Gripping and daring, Children of Jihad shows us the future through the eyes of those who are shaping it.

Children of the Jihad: A Young American's Travels among the Youth of the Middle East

This title is due for release on September 29, 2007
We'll send you an email as soon as it is available!