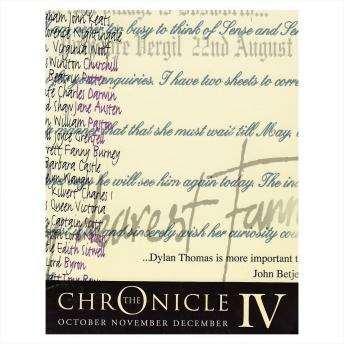 The Chronicle is an epic anthology of the most interesting and revealing diaries and journals written during the last 500 years, providing a fascinating and intriguing record of life as witnessed by some history's most colourful characters. From Samuel Pepys to Alan Bennett, Dorothy Wordsworth to Barbara Castle and Oliver Cromwell to Evelyn Waugh. The Chronicleis one of the most ambitious productions ever commissioned as an audiobook. It contains 120,000 words from over 150 diarists and letter writers, and is performed by an outstanding cast of 30 actors in a dramatised setting with music and soundtrack, with a combined total running time of just under 12 hours. Available in four parts. Arranged in the form of a calendar, it is a daily record of British life from 1st January to 31st December, and provides a vivid and entertaining portrait of the life and times in which the writers lived. Narrated by Joss Ackland; Jenny Agutter; James Bolam; Tony Britton; Charles Dance; Eleanor Bron; Maureen Lipman; John Sessions; Robert Powell; Donald Sinden; Imogen Stubbs; David Suchet; Harriet Walter; Timothy West; plus full supporting cast.