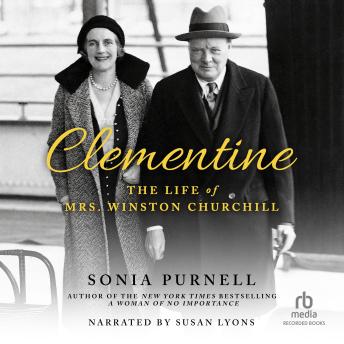 A long-overdue tribute to the extraordinary woman behind Winston Churchill By Winston Churchill's own admission, victory in the Second World War would have been 'impossible without her.' Until now, however, the only existing biography of Churchill's wife, Clementine, was written by her daughter. Sonia Purnell finally gives Clementine her due with a deeply researched account that tells her life story, revealing how she was instrumental in softening FDR's initial dislike of her husband and paving the way for Britain's close relationship with America. It also provides a surprising account of her relationship with Eleanor Roosevelt and their differing approaches to the war effort. Born into impecunious aristocracy, the young Clementine was the target of cruel snobbery. Many wondered why Winston married her, but their marriage proved to be an exceptional partnership. Beautiful and intelligent, but driven by her own insecurities, she made his career her mission. Any real consideration of Winston Churchill is incomplete without an understanding of their relationship, and Clementine is both the first real biography of this remarkable woman and a fascinating look inside their private world.