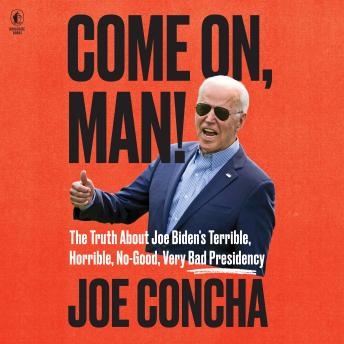 Come On, Man!: The Truth About Biden's No-Good, Horrible, Very Bad Presidency, and How to Return America to Greatness

Open borders, record inflation, and skyrocketing crime—Joe Biden’s first term is one of the most craptastic in American history. But on Planet Brandon, it’s all going according to plan . . .

He received 81 million votes. His party controlled the House and the Senate. He took office with a nearly 60 percent approval rating. His first month saw the economy recovering nicely and the new COVID-19 vaccines being distributed around the country. And, in his words, he had the awesome power to mobilize “truinernashabada pressure.”

And yet, with all that and more, Joe Biden’s first term has been a spectacular failure. COVID roared back. The withdrawal from Afghanistan left thirteen U.S. service members dead and hundreds of Americans stranded as Afghans fell from airplanes. Sixteen American cities set homicide records. More than 2.3 million illegal immigrants entered the country. Inflation reached forty-year highs. And Russia invaded Ukraine. Even the Democrats are so embarrassed, they won’t invite Biden to join them on the campaign trail for the midterms. Gah.

But is this hot mess, dumpster fire of a record only because Biden lost whatever fastball he had and is perpetually incompetent? In Come On, Man!, Joe Concha reminds us what’s really going on in the White House. Though Biden may seem like a doddering idiot, stumbling from one mistake to the next, his blunders always hew closely to progressive dreams for American policy. Dreams like saving the planet by attacking Elon Musk and strengthening the middle class by making gas prices higher than Hunter Biden in a motel room. Come On, Man! shows the real reason why we’re here—no malarkey, guaranteed!

This title is due for release on September 27, 2022
We'll send you an email as soon as it is available!