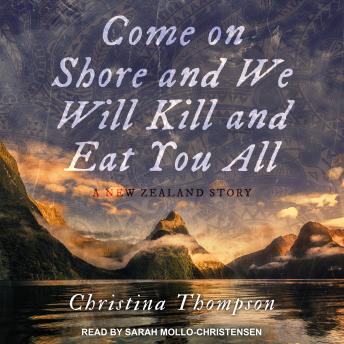 Come On Shore and We Will Kill and Eat You All: A New Zealand Story

Come on Shore and We Will Kill and Eat You All is the story of the cultural collision between Westerners and the Maoris of New Zealand, told partly as a history of the complex and bloody period of contact between Europeans and the Maoris in the late 18th and early 19th centuries, and partly as the story of Christina Thompson's marriage to a Maori man.

As an American graduate student studying history in Australia, Thompson traveled to New Zealand and met a Maori known as 'Seven.' Their relationship is one of opposites: he is a tradesman, she is an intellectual; he comes from a background of rural poverty, she from one of middleclass privilege; he is a 'native,' she descends directly from 'colonizers.' Nevertheless, they shared a similar sense of adventure and a willingness to depart from the customs of their families and forge a life together on their own.

In this book, which grows out of decades of reading and research, Thompson explores cultural displacement through the ages and the fascinating history of Europeans in the South Pacific, beginning with Abel Tasman's discovery of New Zealand in 1642 and Cook's circumnavigation of 1770.

Come On Shore and We Will Kill and Eat You All: A New Zealand Story