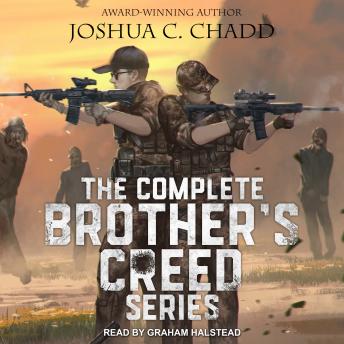 Returning to town after a weekend on their ranch in Montana, James and Connor Andderson learn firsthand that the dead are coming back to life. As the nation succumbs to an outbreak unlike anything ever seen, the brothers must gather their supplies and set out on a road trip to save their parents from a fate worse than death itself. Their naïve optimism quickly fades, and the choices they confront will leave them scarred for life.

Meanwhile, Emmett Wolfe, along with his daughter and ex-wife, leave Texas bound for a safe haven in Alaska. Along the way, they rescue a mysterious young woman from a shopping mall.

Tank finds himself amidst a group of survivors heading north, but their convoy is stopped dead in its tracks when they're ambushed by a gang of ruthless killers. Escaping the attack, Tank and two others are hunted through Wyoming by the bloodthirsty Reclaimers.

As the virus spreads across America, the remaining survivors must band together to fight not only the walking dead, but the living as well. Their journey to the Alaskan wilderness is met with constant hardship, betrayal, and death. But as the world crumbles around them, they will come to realize they cannot lose what makes them human.