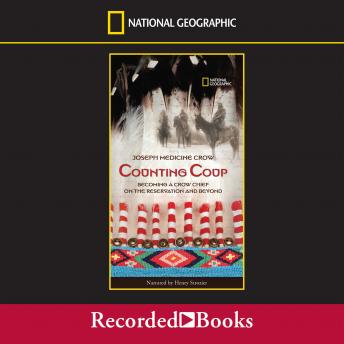 Picture a Crow Indian elder, his wizened eyes catching yours in the ancient flicker of firelight. His mesmerizing stories span the ages, from Custer to World War II to the 21st Century. He is the last traditional chief of his people. He is over 90 years old. Now picture that same man lecturing at colleges nationwide, and addressing the United Nations on the subject of peace. National Geographic presents the amazing life story of Joseph Medicine Crow, the man who begins life as Winter Man. Trained as a warrior by his grandfather, Yellowtail, he bathes in icy rivers and endures the ceremony of 'counting coup'-facing fierce combat with an enemy Sioux boy. An operation at the local hospital brings the young Crow face-to-face with his worst fears: a Sioux, a ghost, and a white man. He excels at the white man's school and is raised in the Baptist faith. He translates the stories of the elder chiefs, becoming the link to the ancient traditions of the pre-reservation generation. His own dramatic and funny stories span both ages, and the ancient Crow legends are passed on in the storytelling tradition. Joseph Medicine Crow's doctorate degree was interrupted by the call to arms of World War II. On the battlefields of Germany he earned the ancient status of War Chief by completing the four war deeds required of the Crow warrior. In 1948 the Crow Tribal Council appointed Joseph Medicine Crow (now called High Bird) their Tribal Historian and Anthropologist. Counting Coup is a vibrant adventure narrative, bringing Native American history and culture alive for young readers. Joseph Medicine Crow's story illuminates the challenges faced by the Crow people as hurricanes of change raged through America. His epic story and its lessons are an essential legacy for us all.

This title is due for release on January 25, 2013
We'll send you an email as soon as it is available!